Donald Trump expresses his frustration with the Department of Justice 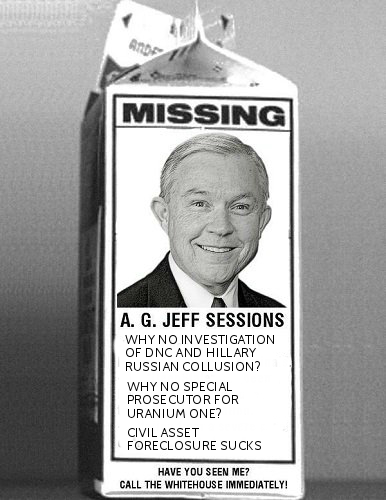 Axios: President Trump unhappy Department of Justice is not going after Hillary Clinton

Hot Air: Time for the Jeff Sessions must go watch?

Congressman Says Jeff Sessions Has Recused Himself on the Uranium One Deal https://t.co/BXVtogyUEm
— Hail to the Chief (@AmericanVoterUS) November 3, 2017

Weasel Zippers: Free Beacon: Report that Jeff Sessions HAS NOT recused himself from Uranium One

It is probably counter productive to fire Mueller at this point (despite the fact he should have recused himself long ago), but it does make sense to either have the Justice Department go after Clinton-Obama Russian Collusion and Uranium One or appoint another special prosecutor to do so.

Sessions has also been a disappointment in other areas. Sessions is flat out wrong about civil asset forfeitures.

Hot Air: Fire Mueller? Did someone actually find him?

Don Surber: Justice Department is not independent, nor should it be

Instapundit: The rise and fall of the Podestas, Deputy FBI Director McCabe has some explaining to do, Dirty Debbie Secrets, Sessions should unrecuse, fire Mueller, and start doing his job, Hillary wins "Democratic" woman of the year same day Donna Brazile confirmes she broke, How Democrats cheated Sanders and then lied about it, Networks ignore what Donna Brazile admited, Democrats slowly realizing Obama destroyed their party (although to be fair, he did have some help), Debbie Wasserman Shutlz and Perkins Coie engaged Crowdstrike, The Left Always Eats Its Own, Of course, Donna Brazil should be bearing a lot of responsibility too for the Democrat party mess and Twitter in the bag for Democrats