Should the Right adopt the tactics of the Left?

There is a debate about this.  Some like John Sexton, Andrew Klavan, and Donald Douglas think adopting leftist tactics is wrong (Donald has strong feelings about it). John Podhoretz goes so far to call protesters at Julius Caesar "animals" who are destroying the country! Wow, protesting at a play is 'destroying the country,' Podhoretz is getting as 'excitable' as Andrew Sullivan used to do.

I have zero problem with people's free speech rights, free speech by its very nature means protecting offensive free speech you disagree with. I really do not want to shut down the left's free speech. I just have a real problem with them shutting down my rights. So while I acknowledge the opinions of Messieurs Sexton, Klavan, Douglas, and Podhoretz and take them very seriously (well except for Podhoretz's over the top reaction), I respectfully disagree. In my opinion, some 'uncivil' push back is warranted. Civil disobedience, when done properly, is ok.

Now Shakespeare in the Park has the right to present Julius Caesar anyway it wants. I personally think having a play depicting any living President getting murdered is inappropriate, but that's me. The producers and director made the artistic decision to depict Julius Caesar as Trump to make a political point. They absolutely have a free speech right to do so.

It was artistic smugness that prompted the Hamilton cast to call out Mike Pence in the audience (wasn't that wrong, in context).  I am a fan of the play Hamilton, even if I have not had the opportunity to see it three times like Podhoretz. No one disputes the rights of anyone to tell Mike Pence what they think (has some of the Hamilton cast members invited the VP for a discussion after the show I would have been fine with it--I just though the way they did so from the stage was rude as hell. To his credit, Steven Van Zant thought what the Hamilton cast did to Pence was inappropriate and called them out for doing that (good for him). 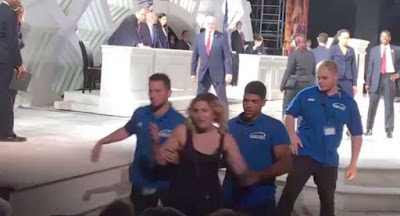 If protests shut Julius Caesar down completely--preventing the show from going on, Andrew Klavan would have a stronger point. They didn't. They disrupted the play for a few minutes and the show went on.  I suspect people will get over it. Yes it was a publicity stunt, that was the intent.

So I have no problem with protesters acting up during a single performance of a play to make a point. Was it effective?  We are talking about it, to that extent it was effective. They did not act violently, or call in a bomb scare, or endanger anyone--they just disrupted a performance.

As Andrew Breitbart used to say, "So?"  BTW, remember when Rolling Stone's Mike Taibbi gloated about Andrew's death? A lot of people in the arts and media are contemptible. I have zero sympathy for their sensibilities because they have zero sympathy for us. And I really do not want to suppress their rights--but I will not tolerate what they are doing to us and our rights. 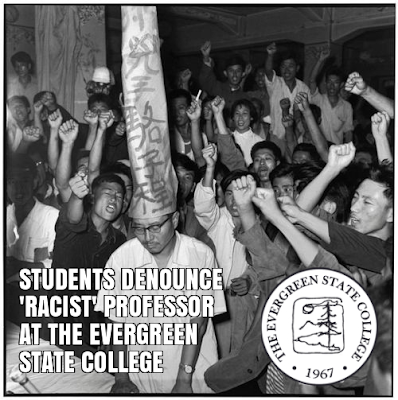 When the fight is unilateral and the left think they can shut down any dissent on college campuses (college campuses are the front line in the free speech wars, but it is expanding beyond that), the time has come to fight back. They admit they want to "weed out" dissenters. At Evergreeen, for example, if you chalk "Make Limp Bizkit Great Again" they will come after you will baseball bats. And the campus administration will do little to protect your free speech rights (they are barely holding it together).

Ace makes the case for emulating the tactics of the left. I fully concur with this--and I would go beyond just boycotts and advertising pressure (although that should be part of it). Any protests should be peaceful, of course--with wit and humor whenever possible. But, as Glenn Reynolds says, let them feel what its like to have their hair pulled.

John Sexton, while not a fan of the play disrupting tactics, also recognized why something like this might be for the greater good:


I don’t support interrupting performances of Shakespeare. I also don’t think the play is a threat except in the nebulous “climate of hate” sense which the left trots out whenever they find it helpful to blame the right. However, maybe this protest will do some good if it causes people on the left to realize where this is headed. This is your politics, progressives. Can you see now how this is a bad idea? If so then, start by addressing the problem at the source: Your own backyard.

The purpose of doing this is not to promote disrupting free speech, but to make clear the right will fight back against such tactics. With the left flirting with Trumpicide, some protest push back seems warranted. We do have to be smart about that sort of resistance. And if a tactic turns out to be counter productive, stop using it and try something else. 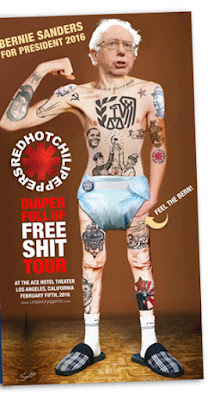 I love the guerrilla street art stuff Sabo is doing in Los Angeles. I want to see more protests/actions like that.

SABO: I believe the Right has a great message, sadly the only people telling it are those on the Left and they do a damn fine job making us look like ass holes and what do Republicans do about it, NOT A DAMN THING!!! Fuck it! I guess it’s just going to have to be me, I thought. My aim as an artist is to be as dirty, ground level, and mean as any Liberal artist out there, more so if I can. Use their tactics, their methods, appeal to their audience, the young, urban , street urchins with a message they never hear in a style they own. My name is SABO, I'm an UNSAVORYAGENT.

American Power: MSNBC's host Joy Ann Reid attacks Steve Scalise while he is in the hospital

Mark Steyn: Action and Reaction, The Cultural Appropriation of the Resistance and The Seduction of Violence

Legal Insurrection: To disrupt or not disrupt, that is the question (his readers are voting 3:1 for the right engaging in more disrupting).

Instapundit: The Remodern Review: This is not about disrupting a play, this is about pointing out the Orwellian distortion of Shakespeare and posturing,  American Spectator: The left flirts with Trumpicide, Andrew Klavan's readers disagree with Andrew, the uncivil nature of some on the left, Democracy Dies in Doxxing, and Better Call Saul

Charlie Martin: Brush Up Your Shakespeare and Assassination Shakespeare