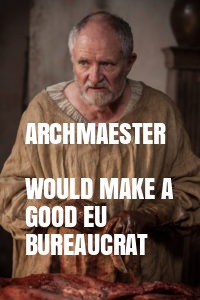 Game of Thrones as a mirror to our situation?


Some are saying GoT is really hinting at Climate Change (and its denial) as the threat. That may be, although is the world getting an extended summer really such a terrible fate? Of course we have Al Gore, who got his wreath initially from fossil fuel stocks and is traveling the world in private jets, claiming we are all facing doom if we don't change our ways. Other celebrities are willing to part briefly from their lifestyles, to occasionally chide us about our carbon generation. We are all too selfish to pay attention to them...

Or is the real threat the massive influx into Europe of persons hostile to Western Civilization?

Powerline: Sea monsters not too far off

TOM: Crazy is a Pre-Existing Condition

American Power Blog: The Death of the West

Twitchy: Eco-Warrior bravely gives up private jet, for a day

EBL: What's going on with hockey sticks and climate change?

Watts Up With That: US government declines to attend Zuckerberg's Green PR Stunt

Mark Steyn: The biggest issue of our times, It's still the demography, stupid! and Mann, Hockey and Climate Change

Instapundit: You go first Bill, ALL IS PROGRESSING AS MARK STEYN HAS FORESEEN: As Europe’s migrant crisis enters a new phase, it’s clear that European leaders have neither the will nor desire to preserve their own civilization; Bill Nye the Let The Old Die Off Guy, and Solving Global Warming Through Family Planning