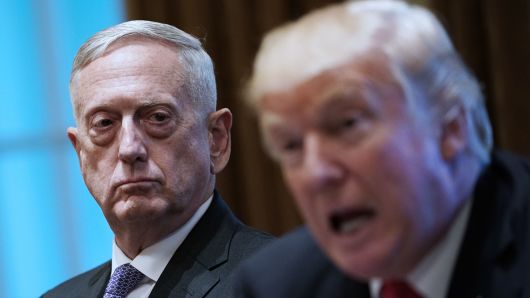 This is not good. I recognize that cabinet members can disagree with the Commander in Chief (and there were disagreements between these two), but is this what prompted his resignation?  I thought it was positive when McMaster went and was replaced by Bolton but the timing of this resignation is not good at all.

I am no fan of perpetuals wars as Bill Kristol and his ilk were eager to promote. While I am not eager to have troops deployed in combat situations indefinitely, I am also not thrilled when something Obama did in Iraq is potentially repeated in Syria. This seems rushed. Especially when it seems to have been prompted by a phone call between Erdogan and Trump (catching a lot of Trump's advisers by surprise). We have allies in the region, such as the Kurds, and the Turks are hostile to them. Christians in Syria are still at great risk.  There is also danger in giving Syria over to Russian and Iranian influence.

You can balance that with very low casualties in Syria of US forces. Any death is one too many, but we have a minimum force there and they are reasonably protected.

If the Saudis are going to step things up, that is a potential good thing (they help counter the Iranians). But things are still very fragile.  As we saw recently, ISIS thugs may be defeated as a state, but they are not going away. ISIS terrorism is very real.

Update: Politico has this on Why Mattis Had To Go. While certainly slanted as Politico is apt to do (against the President) it probably has some truth to it too. I would point this out, a President who thinks his advisors are working against him would tend to stop trusting those advisors.

FP: A Win (of sorts) for Mattis on Syria

USA Today: The chasm between Trump and Mattis

Andy McCarthy: US has no stake in the fate of Syria

National Interest: Why Trump is right to withdraw US Troops

TOM: Syria, Afghanistan, and the #NeverTrump problem of Jonah Goldberg

Army Times: Here's What May Be Driving A US Troop Withdrawal From Syria

Don Surber: Trump's ability to work with a NATO ally in Syria and I did not vote for Jim Mattis

Powerline: The Cost of Betraying Syria's Kurds, VDH on Syria, Mattis Letter and Trump to pull troops from Syria

Instapundit: This is perceptive..., More on the Mattis Resignation and Mattis retiring in February, likely over Syria

USA Today: Trump considering withdrawing troops from Afghanistan. I am far more sanguine about this. We are not leaving Afghanistan completely, but reducing forces. Afghanistan is a mess of competing groups that hate everyone. Our job is not to fix it, or keep throwing troops and money at the problem, but keep elements such as the Taliban from metastasizing. We did well initially with a light footprint there.

NPR: Why does the US like Iraqi Kurds but not Syrian Kurds? Note this article is from 2014. Obama betrayed Kurds left and right (and the media mostly did not call him out on it--certainly not like they are doing with Trump). The issue with Syrian Kurds and the Turks is complicated (to say the least). The US and Turkey are still NATO allies. But the Erdogan government in Turkey cannot be trusted and is increasingly hostile to our interests. The Kurds are, however, hostile to ISIS (while Erdogan courts Islamists). We should not sell out the Kurds.

Via Comments over at The Other McCain:


K-Bob • 2 hours agoGeopolitics and war are an area of human endeavor that paradoxically winds up being both dead simple and irreducibly complex. Add in the fact that a leader cannot telegraph his plans before they are achieved, and you get what we have today: a bunch of experts who know little more of what is actually going on than the random assclown who yells, "No blood for oil!
Postmodernism has people deconstructing things that worked for thousands of years, which is bad enough. But the postmod need to pick everything apart at the micro level leads to a lack of desire to bother understanding the whole, or even major parts of anything. So a lazy web of assumption defines the postmod worldview.
This is why most so-called analyses of our military activities are infested with catchphrases like, "world's policeman," and "endless war." The pontificators act like they understand things like geurilla warfare, asymmetrical warfare, and special forces, but then their arguments show that in their minds, we still manage all conflicts like Napolean positioning rectangular arrays of soldiers, and where each contact with the enemy yeilds casualties in the thousands. Which results in them believing the specter of a "war weary people" hovers over any military deployment, like the ghost of D Day.
This is why "endless war" sounds almost like it means something serious. The reality is that, as long as the major powers continue to avoid armageddon, western nations are militarily in the long tail of world conflict. The stuff that we always knew would be a long, agonizingly slow, expensive grind. It's not classic war, with opening salvos and treaties signed at the end.
It's the kind of shit that takes forever, and which will continue until we, as a planet of people, end it. And ending it won't occur through chants, a sudden flash of enlightenment, or a charismatic world leader. It will be accomplished by some form of kinetic enforcement.
And a fully stable Middle East won't mean the end of continual troop deployments. Not even close. Just maintaining bases around the world is dangerous work (in fact, a full third of casualties in Afghanistan were not battle related).
So the incompetence and dishonesty in both the media's reporting, and our pundit class pontificating about Syria makes it hard to trust any of them.
Having wrote all that, I found two reports worth your time...
Carolyn Glick (Breitbart): Caroline Glick: Pros and Cons of the U.S. Pullout from SyriaKyle Rempfer (ArmyTimes): Here’s what may be driving a US troop withdrawal from SyriaThere's a *lot* going with Syria that you won't get from guys like Jonah Goldberg or cable news types.