Dear GOP: Let Us Opt Out Of Obamacare... 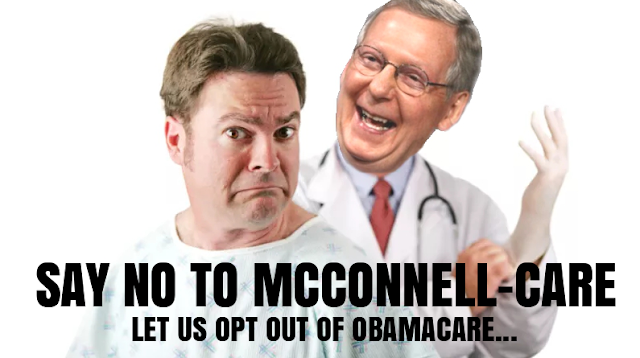 Seriously "Doctor" Mitch, keep your hands to yourself...

Okay, if the GOP lacks the votes to repeal Obamacare outright (which I would prefer), why try to create a replacement--especially one messing with Medicare? Both Ryancare and McConnell-care suck, only slightly less than Obamacare in its current form. Politically this seems to be a mistake for the GOP.  I predict if Ryan and McConnell manage to pass something like these current proposals into law, it will be a political disaster for the GOP as big as Obamacare ended up being for the Democrats.

Why not simply assemble the votes to create an escape hatch to Obamacare (such as allowing insurers to give catastrophic plans again with out all the Obamacare regulations that drive up the cost of insurance).

Let people go outside their employer or state exchange and purchase a high deductible health plan across state lines without the restrictions of Obamacare. For regular anticipated treatment they can use health savings accounts with pretax dollars.  For those who prefer Obamacare, they can stay there (for the time being).

Let Obamacare slowly wither away and die, in Darwinian fashion, with a 'DNR' order.  Consumers will determine survival of the fittest health care options.  Let us vote with our health care selections. 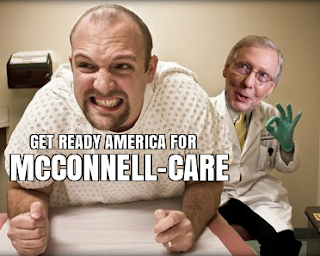 Powerline: Obamacare Lite and Is the GOP going about health care reform backwards?

Rush Limbaugh: Dems say GOP Healthcare bill will kill people and Is Mitch McConnell this smart? Interesting theory, whether it is true or not depends on what the GOP comes up with to follow.

Instapundit: Does the pitch for single payer sound too good to be true, good, you're learning, Obamacare Train Wreck, We don't want to restore Obamacare, we want to repeal it, Robert Polock: Let Consumers Repeal Obamacare, Repeal Appeal, Why Obamacare did not make us healthier, Off to Mexico for care? Adios! and Obamacare repeal will not kill tens of thousands

Wombat: American Thinker: Liberals Don’t Need To Win Elections To Get What They Want and Megan McArdle: Senate’s Obamacare Replacement Is A Suicide Mission

Wombat: Da Tech Guy: Just So You Realize The Senate Healthcare Bill Is Going To Pass (while Pete's analysis of the media is sound, I hope when it comes to this bill he is wrong and it does fail) and Joe For America: BETRAYED! McConnell & Senate GOP Put The Penalty Back In Healthcare Bill!

Some of the Fake News Media likes to say that I am not totally engaged in healthcare. Wrong, I know the subject well & want victory for U.S.
— Donald J. Trump (@realDonaldTrump) June 28, 2017

NYT: Given its propensity for Fake News, I do not trust the New York Times.  But assuming this story is not a complete fabrication, Mr. Trump's alleged lack of cooperation with Mitch McConnell on this health care reform effort might be a good thing. 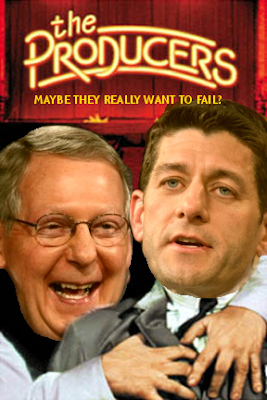 Time: Was the Senate bill crafted to fail?

Rush Limbaugh: Rush's theory is all the rage!

AmPowBlog: Makes the pitch for repeal and replace

Powerline: What's next for Obamacare reform in the Senate?
Posted by Evi L. Bloggerlady at 6:00 AM