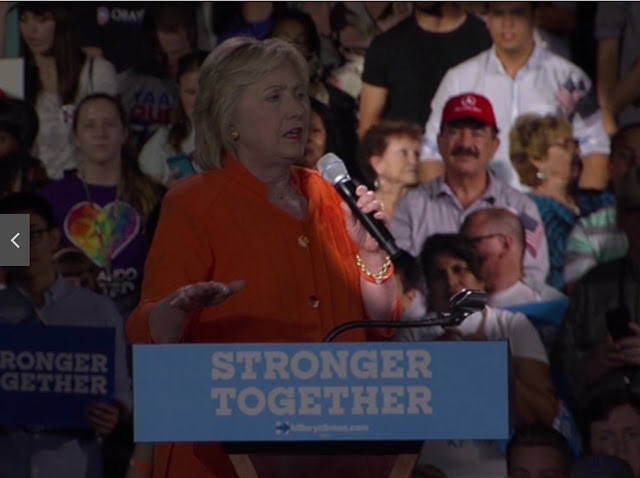 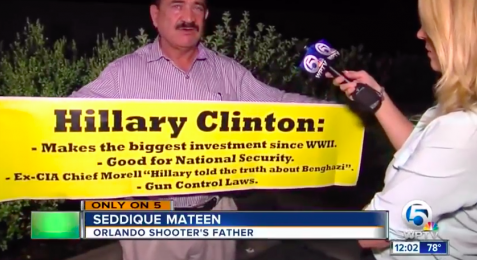 The media never focused on the fact the Orlando shooter was a registered democrat and Hillary  Clinton supporter.  Could you imagine the uproar if he supported Trump?  Now we have this bizarre scene with the Orlando shooter's father right behind the podium for Hillary.  And he was invited to attend by the DNC.

Hillary Clinton mentioned families still grieving from Orlando, with the shooter's father in choice seats right behind her. That shows how much she cares.

I have stopped using the names of mass shooters (terrorists, mad persons, etc.). I am convinced that  beyond evil indoctrination by Islamists groups such as ISIS, media coverage drives these attacks. The attacks need to be addressed, but the names of the killers need not be given attention (even if it is of a notorious kind).

Instapundit: Imagine if Hillary was a Republican (if she was a Republican she would have been charged criminally), The whole Orlando shooter's father attending the Hillary rally in Florida even worse than you thought, Who is trying to lose this election? BTW, did the FBI ever find the shooter's wife who they "lost" after the attack?

EBL: Trump's Detroit Economic Speech, Hillary's Emails Were Not Victimless and Ben Watson: What if I told you that Planned Parenthood was created to exterminate black people...,  A tale of two media narratives: RNC and DNC, Why Anderson Cooper is a dick, Time to choose: Be a sheepdog, Orlando Accomplice?

RedState: Shocker How did the shooter's father end up at Clinton rally?
Twitchy: Orlando Shooter at Clinton Rally? Clinton Campaign Damage Control In Progress and If Hillary can't vet the VIP seats behind her podium, how is she going to vet the tens of thousands of Syrian refugees she intends to bring in the USA?

AoSHQ: The favored supporters get the seats behind the podium

Hogewash: Suing Hillary
Posted by Evi L. Bloggerlady at 9:28 AM