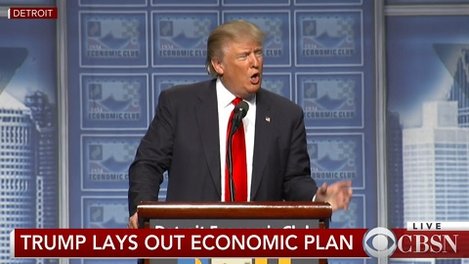 Trump starts off speech with attack on Hillary Clinton.

I love this line: "Detroit is still waiting for Hillary Clinton's apology..."  Trump outlines his income tax reform, cutting rates across the board and reducing regulations.

Trump needs to show to those "undecided" voters that he is a steadier choice than Crooked Sick Hillary and her media cover up cronies.  The media hate Trump, but we knew that. Trump's real talent is how he can use the other-side's over the top attacks to his advantage.

Some might be against making child care tax deductible, but it would be a popular tax cut and it is one that makes having kids more affordable (if you subsidize something you get more of it). I am sure that was Ivanka's doing.

Trump has not have the best two weeks since the RNC and DNC conventions, but three months is a long time in politics (although some states will start voting in two months).  While we can debate how much of an underdog Trump is at this point, Hillary is not dominating the way the media might try to pretend she is.  She is a very vulnerable candidate.

Instapundit: Trump on Detroit and Democrats (true) and Andrea Mitchell and NBC caught manipulating a story and editing out what is not to their liking

AoSHQ: Journalists drop 'objectivity' to 'get Trump' and Stairgate and Unstable Hillary

EBL: Hillary's Emails Were Not Victimless and Ben Watson: What if I told you that Planned Parenthood was created to exterminate black people...

Lem's Place: Does Hillary have Parkinsons? and Hillary's health is in question

Rush Limbaugh: What to think about the polls...