Things are going to get crazy now. Bernie won by double digits in Wisconsin (and will probably win Wyoming too).  It is not cute anymore to Team Clinton. While Bernie's path to the nomination is steep (steeper than Ted Cruz's who right now has a shot at a contested convention), Hillary can't let this socialist upstart beat her in New York.

And while Lynch and Obama may have her back now on the email investigation, don't count out the FBI just yet. That interview of her and the FBI is still looming.  As Salon notes (with these question below) the FBI can do a lot of damage to her:


1. What was the political utility in owning a private server and never using a State.gov email address?

3. Why didn’t you know that intelligence could be retroactively classified

4. Why did you use a Blackberry that wasn’t approved by the NSA

5. What did you say to Bryan Pagliano?

6. Why were 22 Top Secret emails on a private server?

7. Was any information about the Clinton Foundation mingled with State Department documents?

8. Did President Obama or his staff express any reservations about your private server?

9. Did Bill Clinton send or receive any emails on your private network?

10. How was your private server guarded against hacking attempts?

While the FBI investigation probably won't come to a head this month, It will be an interesting few days till the New York primary on April 19. 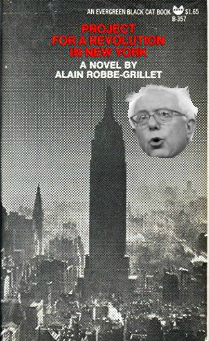 WaPo: Nine things Bernie Sanders should have known but didn't in that NYDN interview

I will add this bonus Warriors clip given its opening week for baseball:

.@jpodhoretz I am going to take a wild guess Hillary has not been on the subway much since this photo op in 1992 pic.twitter.com/IBWBICGntS
— Evi L. Bloggerlady (@MsEBL) April 5, 2016