Anita Sarkeesian: There is not a shred of truth about me being involved in "shadowbanning" and driving my critics off Twitter, and if you disagree that is a manifestation of your misogyny and you deserve what you get! 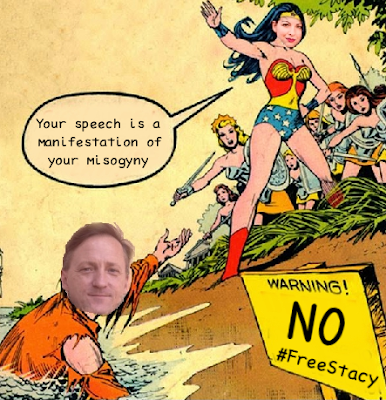 TOM: The Hateful Lies of Feminism

Anita Sarkeesian lays it out at her site:


Of course there isn’t a shred of truth to this perception, but for the people spreading it, the truth is irrelevant. The tweets, blogs and videos are designed to incite rage and enlist more people to join the crusade against me. They are designed to make me out as a powerful enemy of free speech who is determined to crush the expression of any idea she doesn’t agree with, and they conveniently support the perception some have created that I am not a feminist pop culture critic but rather some kind of diabolical supervillain, hell-bent on creating an oppressive society.

This conspiracy and others like it are themselves a manifestation of misogyny, borne out of a deep distrust and hatred of women. They’re designed to foster fear and serve as a warning to other women about what awaits them if they challenge the status quo. Rather than replacing the pre-existing conspiracies, this new one fits neatly in with the others that have been and continue to be proliferated. It’s as if I’m a folk demon and this is yet another horror story people whisper to each other about me and, by extension, about what effects feminism may have on our culture if this imaginary menace is allowed to spread.

Hogewash: #FreeStacy (no, a weekend won't solve it)

Robert Tracinski: #FreeStacy The Old Regime and the Twitter Revolution

Instapundit: Twitter and Witches, Orwellian Nightmare, Using Twitter's own risk factors against it, The rise of the Alpha-Homo as a hero of the right,  Stacy McCain has not been silenced, Lileks and #FreeStacy, Larry Correia Twitter RIP, Adam Baldwin quits Twitter, Doubling Down, Social Justice Activism is a sign of pre-existing mental illness and Abandoning Twitter

Lem/Chip Ahoy: The Monotony of being Anita