Donald Trump so far as been great for the GOP

Ted Cruz is my first pick and I am not a big Trump supporter (I agree, I do not think he is a conservative--he's a populist), but I am definitely not a fan of National Review's Just Say No To Trump Edition. I doubt it will hurt Trump. If anything it just further elevates Trump with his base.

Don't they get it? Donald Trump has so far been YUGE for the GOP. Hillary Clinton is losing Iowa and New Hampshire, and South Carolina is eroding. Hillary is losing millennial single women!  Trump has helped managed to turn the media against Hillary and Bill Clinton. Trump also managed to do it mostly with free media publicity. Trump is doing to Hillary what Barack Obama did to her in 2008, only way worse (for Hillary).

Trump has also managed to completely neuter Jeb in this race. Beyond Lindsay Graham, does anyone really think Jeb could win as the GOP nominee--or should win (I do not think even Jeb believes that anymore).  Jeb, in beta fashion and in response to Trump's attacks has spent millions trying to destroy establishment favorite Marco Rubio (strangely enough National Review is quiet on that).

You would think finishing off Hillary and damaging Bernie Sanders (and Biden) would be the priority. As the GOPe lashes out viciously at Cruz, most of National Review is sort of quiet on that too.  Rush is right, have you ever seen anything like this?  If this is the best the GOPe has, the establishment needs to lose.

I am still not convinced that Trump is going to run the table and take the nomination. If he wins, he wins. The GOPe made it such a point of contention to make Trump pledge loyalty to the party, if Trump wins don't they have to accept that too? Wouldn't it be smart for these conservative intellectuals to make it less likely Trump runs as an independent in the general election if he doesn't win the GOP nomination?

You do not have to support Trump as your guy (I don't). Go support the candidate you like. There are other choices out there to choose from. Maybe you can encourage some of the fringe candidates to drop out to narrow the field and make it less likely Trump will win. If you don't like Trump, I suggest do not attack the man but address the issues and use them to distinguish why your candidate would be better.

Mark Steyn: The Witless Ape: The Director's Cut (Ouch, and in a match between Mark and Lowry, my money is on Mark), The World They Made, and It's Still the Demography, Stupid

EBL: The GOPe is in a complete panic attack over Palin, Trump and Cruz and Bob Dole is an expert on losing to the Clintons

Rush Limbaugh: Trump's appeal isn't about Trump, CNN can't figure out where Rush is coming from,  what they are saying about Trump and National Review, and what it means, and the GOP cares more about donors than voters

Instapundit: Jeb Bush out to destroy Marco, the GOP, and all that money donated to him, Conservative Treehouse: The Insurgency has just begun, Nate Silver suddenly thinks Trump might pull it off, Jonah defends NR anti Trump edition and the beltway hates Trump, but fears Cruz

DaTechGuy: Nate Silver is reassessing Trump's chances based on how the GOPe is helping Trump (and hurting Cruz)

National Review has completely lost its mind with this suggestion!

Breitbart: Selective Outrage and Why We Lose 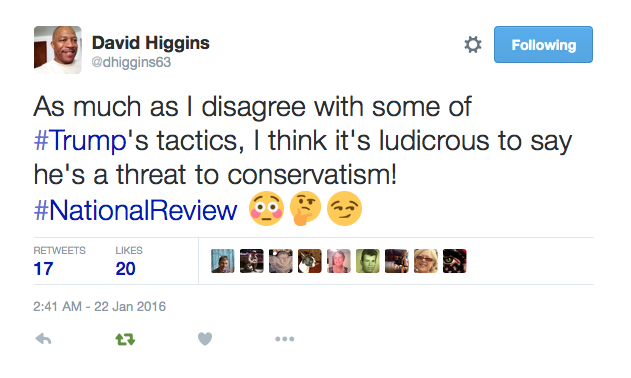