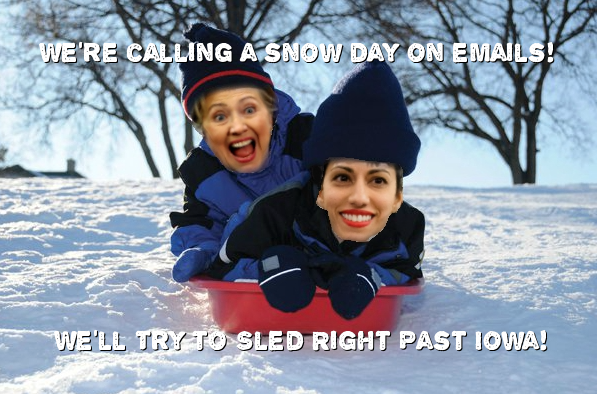 State and Hillary Try To Delay Further Emails For Snow!

Okay, the snow storm is hitting on a Friday and arguably causes a delay over a weekend. Look to Team Hillary to try to get this to be a delay of a month (or more).  The last batch of emails were very bad for Hillary, which makes me think there may be worse to come.

Rather than National Review and other conservatives piling on Donald Trump, they might try focusing attention back on Hillary Clinton. We should be amplifying what is being said in 13 Hours (and promoting people to go see that movie) and reminding voters of Hillary Clinton's role in that disaster. We should be hammering her on emails and demanding a special prosecutor (to put pressure on the Obama Administration). Dog piling on Donald Trump is a distraction and a gift to the Democrats. It is also a gift to Trump.

What conservatives should be doing (other than mocking and attacking Hillary and Bernie right now) is defending and promoting conservatives (my suggestion is Ted Cruz is that guy).  You have the GOPe raging like 28 Days Later zombies on Ted Cruz. If Trump is so bad, why would you stay silent and let the GOPe take out the guy who could potentially beat Trump? Why not attack them?

EBL: So far, Donald Trump has been great for the GOP and Hillary is being nice to Obama to stay out of the clink!

National Review has completely lost its mind with this suggestion! No wonder Mark Steyn is disgusted with his former NR comrades. Seriously, let's focus on the real targets right now.

Breitbart: Selective Outrage and Why We Lose