You conservatives and Jews brought San Bernardino attacks down on yourself: Just in time for Hanukkah!

Remember Syed Farook's dad is the reasonable member of the family:


“I told him he had to stay calm and be patient because in two years Israel will not exist any more. Geopolitics is changing: Russia, China and America don’t want Jews there any more. They are going to bring the Jews back to Ukraine. What is the point of fighting? We have already done it and we lost. Israel is not to be fought with weapons, but with politics. But he did not listen to me, he was obsessed,” Farook explained to US correspondent Paolo Mastrolilli. 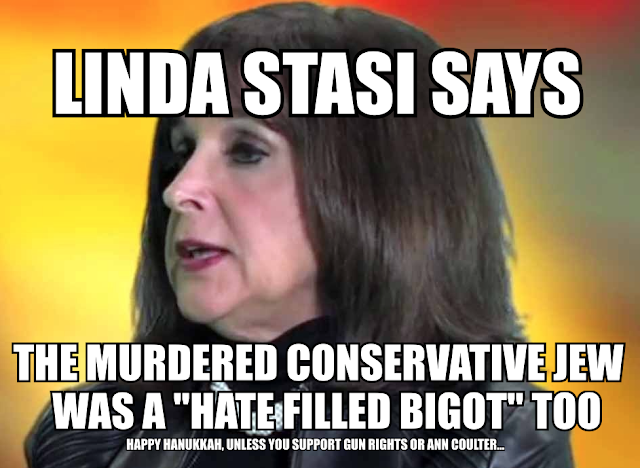 Okay, the Farook family are outliers right?  Well then there is Linda Stasi at the NYDN who says murdered San Bernardino victim Nicolas Thalasinos was a "hate filled bigot" who supported Israel, gun rights and liked Ann Coulter (so he obviously had it coming)

And don't expect much better tonight from President Chidey (Hanukkah btw starts tonight at sundown).  Jazz Shaw asks: Who will the President Obama be declaring war on tonight?

Instapundit: Lefty hated unleashed by San Bernardino attack (they are not directing their animus toward the real enemy) and strange when Americans and the press express hyper sensitivity to dead murderers' feelings

Update:
The New York Times (and the Obama Administration) are clueless.  This sort of home grown terror is not new, there have been dozens of "lone wolf" attacks since 9/11 inspired by Islam. And I doubt there were no dots to connect before this attack happened. 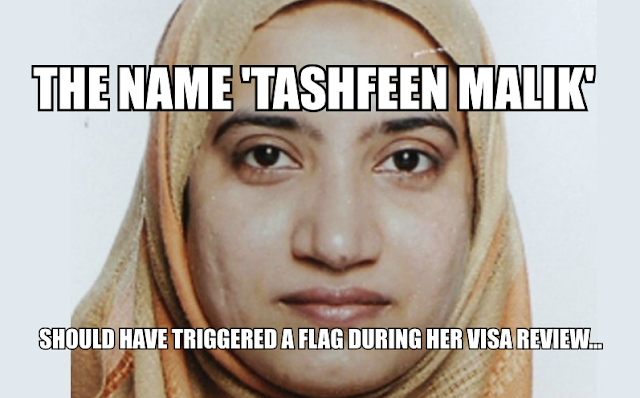 I noted this by Walid Shoebat the other day, the name Tashfeen Malik was a historical figure...


Tashfeen Malik (King) is a nom de guerre for a Muslim Jihadist from the annals ofMuslim history. As he is known to Muslims “تاشفين ملك الموحدين” Tashfeen Malik Al-Muahideen, in English: Tafhseen King of the Unitarians (Muslims) and the conquerer of the west. The history stems from when Yusuf ibn Tashfin led the Muslim forces in the Battle of Zallaqa/Sagrajas. He came to Andalusia from Morocco to help the Muslims fight against Alfonso VI, eventually achieving victory and allowing the Muslims to remain in Spain for centuries. The battle has been symbolic for Muslim victory against the Christians.

Juliette Ochieng/Hot Air: Who's That Girl?

Lem's Levity: Two mass shootings, two separate standards of media coverage
AmPowBlog: Why the delay on Tashfeen Malik's picture and Lefty hate
Regular Right Guy: Was Tashfeen Malik on the no fly list?
Camp of the Saints: More on Fear in the Western World
Protein Wisdom: Packing at the Holiday Party
DaTechGuy: Good, more please and this
Smitty: It confuses me too, kid!
AoSHQ