Frank Sinatra: Fools Rush In with bonus The Song is You

The 12 days of Sinatra continue...

And Pundette has plenty of Mercer on her list! 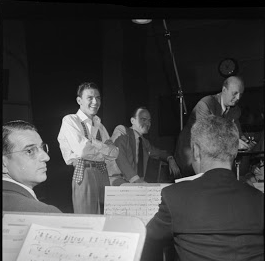 Johnny Mercer may have played a bigger role in Frank Sinatra's revitalization of his career than people may know, as Julius La Rosa notes:


I don't know this with certainty, but I suspect that Johnny Mercer was the force in the restoration of Sinatra's career. In addition to being a great lyricist — some think he was our greatest of all — Mercer was an astute gentleman. He was also president of Capitol records, which he had founded with fellow songwriter Buddy De Sylva. Mercer was one record-company head who really knew what he was hearing.

And I think Mercer recognized Sinatra's as-yet untapped . . . genius. I don't think the word is an exaggeration. What John Gielgud was to Shakespeare, Sinatra was to the American song. We discovered him with Dorsey, he proved we were right about him at Columbia, and from his very first recordings for Capitol we realized, if we hadn't done so already, that we had a giant on our hands. Nelson Riddle recognized it. Songs for Young Lovers is still my favorite album. Riddle is credited rightly for recognizing the depth of Sinatra's musical instincts. He appreciated Sinatra's intelligence and, I guess, understood his temperament. His arrangements for those early Capitol albums are masterpieces, one after another. And the mature Sinatra was revealed. The ballads are touching, heartbreaking even, and the sense of identification is incomparable. In the reprise of My Funny Valentine when he sings "But donnnnn't change a hair for me ..." oh, the pain. And rhythm songs now were fun. "I get a kick . . . mmmm, you give me a boot!" Cole Porter may not (I would assume) have liked the interpolation, but everyone else did.

La Rosa also mentions in the article above that the only time he heard Frank go falsetto in a song is in Jerome Kern and Oscar Hammerstein II's The Song Is You recorded on Bluebird in 1942 and arranged by Alex Stordahl. I will throw it in as a bonus.

EBL: Sinatra and Fitzgerald: The Song Is You medley (there are some great links to Pundette, Mark and Bob) And this great medley is the one Mark Steyn describes in his The Lady Is A Tramp post.

Mark Steyn has Kern's Pick Yourself Up as Song of the Century #92. For a century's worth of Sinatra songs Mark has listed see here. For Mark's podcast with longtime Sinatra conductor Vincent Falcone, you can find Part One here and Part Two here. For Steyn's take on Sinatra at the movies see here. Mark and Celeste Holm recall Sinatra & Co in the film High Society here. And for Mark's original 1998 obituary of Frank, "The Voice", can be found in the anthology Mark Steyn From Head To Toe, while you can read the stories behind many other Sinatra songs in Mark Steyn's American Songbook. Personally autographed copies of both books are exclusively available from the SteynOnline bookstore.