I was listening to Rush today explain how the GOP establishment and many corporate interests are buying into the whole Democrat Crony Capitalism because they stand to benefit from it.


"All of the Republican major donors want this bill," he said. "I'll give you some names.  The Koch brothers, Sheldon Adelson.  I mean, they want the bill, because they want the influx of new labor.  They want it. They're not concerned with how anybody's gonna vote down the line.  As long as these guys can stay aligned with whoever is running government, they're in fat city."He said Republicans who support amnesty want the public to think "immigration reform" is about "ideas" and "politics," but it is really about the crony capitalism that has made Washington, D.C. a boomtown. Limbaugh said, "there is a growing phenomenon in this country of crony capitalism taking place," and moneyed interests and corporations actually support government.He said big corporations never criticize government and don't really care which political party is in the White House.

Update:
More from Legal Insurrection (it is all a big charade).
What a Republican victory might look like (he's half right, just say "No!")

As anyone who has listened to Rush lately or has read what he has been saying knows, Rush Limbaugh is very much against this comprehensive immigration reform plan and basically concludes it is a plan by the Democrats to create a permanent advantage for Democrats. Rush is urging conservatives and Republicans to defeat this effort.  Then there was a break and then a radio ad similar to this video one played:

These claims in this ad are simply misleading and untrue:

Rubio's makes the following claims in his minute-long advertisement, represented to the public as "conservative immigration reform."  The article by Jon Feere is worth a read.  It addresses each one of Rubio's misleading claims as stated below.
The ad is based on the "Gang of Eight" Senate bill:  Rubio is in essence helping President Obama fulfill his campaign goal of keeping all illegal aliens in the country and giving them benefits reserved for legal residents. Within six months of the bill's passage, illegal immigrant would become immediately eligible for legal status, and many of the hoops that illegal immigrants would have to jump through to get such status amount to very little.  According to an article published on Wednesday, May 22, there would be immediate welfare payments to immigrants who get legal status.

There are many loopholes and flaws with the pending bill that will allow the Democrats to continue to do what they are doing on illegal immigration enforcement (which is essentially nothing, other than some selective enforcement of people to make people more pro amnesty).  Who is paying for these ads?  Mark Zuckergerg is doing so.

Did you know Mark Zuckerberg was a conservative?  I sure did not know that.  Which is weird since Zuckerberg is a big Obama supporter.

It is strange to hear Rush take apart the Republican establishment arguments on craprehensive immigration reform, only to hear a very pro immigration reform ad during the break.  But Rush has a show to run and he assumes the listeners are smart enough to figure it out. 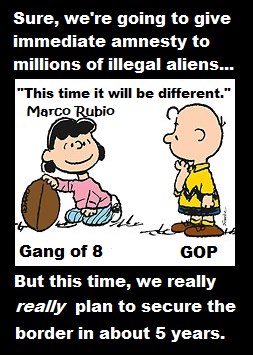 It is sad that so many GOP politicians are either short sighted, stupid, or both.  And the hope this will endear Republicans to the Hispanic vote is just false:

Separated at Birth: Robert the Bruce and...?