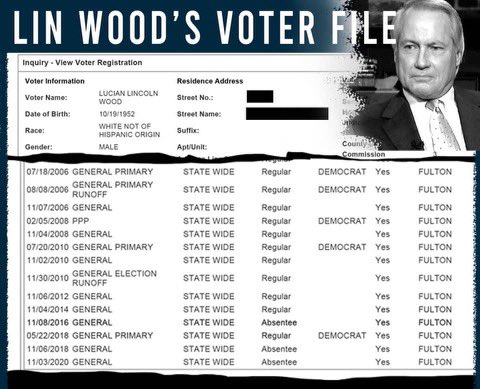 Lin Wood Disputes This
I do not want to engage in a circular firing squad with purported Trump supporters. I trust Sydney Powell and she is sympatico with Lin Wood. Mr. Wood has some legitimate criticism of AG Barr. I appreciate what Lin Wood did with defending Richard Jewell. But given some of his rehtoric lately (such as calling for a boycott of the Georgia Senate Runoff Elections), this voting record is concerning.
Conservatives and Republicans boycotting the runoff election is a bad idea. There was election fraud that tipped races and for AG Barr to suggest otherwise is infuriating. At a minimum there should be a special prosecutor appointed (a fair and objective one) to investigate this. The Democrats will continue to try to steal the Georgia run off races like they stole the White House and the Michigan Senate race, but making it easier for Chuck Schumer to take over the Senate is a bad idea.
Ultimately, Republicans have to fight as if this was a life or death struggle, not just going along with the (sadly) normal out of power party grifting. The stakes are that high.
AoSHQ: Morning Report 12.03.20
Instapundit: Behind The Black: The Election Has Been Stolen and Win Senate
Mark Steyn: It Ain't Over Till It's Grover and We Didn't Order These Sandwiches
Da Tech Guy: The Price The GOP Will Pay For Allowing The Election To Be Stolen

I learned tonight that image below is on Facebook.

I have NEVER voted by absentee ballot in the last 10 years & do not recall ever doing so since I first voted in 1972.

I voted in person for @realDonaldTrump in 2020.

Image is disinformation a/k/a as a LIE. pic.twitter.com/07BfD8hkp1

I don’t know who this clown is, but anyone saying America would be better off w/ Chuck Schumer as Majority Leader—producing huge tax increases, the Green New Deal, massive amnesty & a packed Supreme Court destroying the Bill of Rights—is trying to mislead the people of Georgia. https://t.co/jtEPT2UtzF