John Roberts: You Can't Fire Me Because I Wear A Dress 🏳️‍🌈 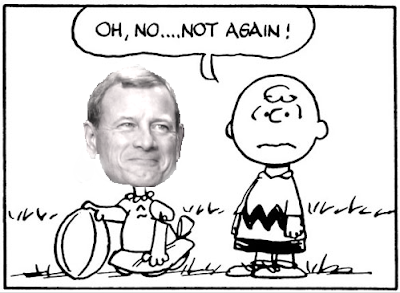 Sweet Baby Jerkins, can these supposed conservative guys just have the balls to say "no." And why is it the lefty justices always do exactly as you would predict, but the right always has to have a few confused justices to mix things up?

J.J. Sefton recognizes what is going on. Roberts and Gorsuch better think twice about appeasing the left:


Don't believe me? Look what happened to Drew Brees, the 30-year career sports commentator (can't remember his name), J.K. Rowling, and on and on and on. Forget the letter of the law; if Gorsuch and Roberts think that the Left, whether it's the militant homosexual community and now weaponized transsexuals are going to respect synagogues and churches (not mosques) or businesses that are run by people of faith, get ready to bake that cake. Or else.

All of it, from this insane ruling to the BLM terrorists and all the rest, is not about inclusion and diversity. Just the opposite. It is about punishment and/or the eradication of political enemies with the thinnest of gossamer veneers of "justice," real or social as the case may be. Eradicate the family, eradicate biological norms, eradicate society, eradicate anyone or anything that stands in the way. Wipe the slate clean and declare Year Zero. Gorusch and Roberts just gave them the green light, and a nuke.

So it is perfectly ok to fire or pillar someone because (gasp) they wear an OAN t-shirt. But if it is about sexual behavior, whooooooaaaaa Nelly!  Well at least certain sexual behavior.

Twitchy: Conservatives Can’t Be Allowed To Be Coaches, Teachers, Cops, Doctors, Lawyers, Or Bosses Until Rehabilitated

Instapundit: Thomas asks: What about the 2nd Amendment? and Thomas, Alito, and Kavanaugh do the right thing...

Rush Limbaugh:Did the Kavanaugh Hearings Intimidate Conservative Justices? and So where is the push back?