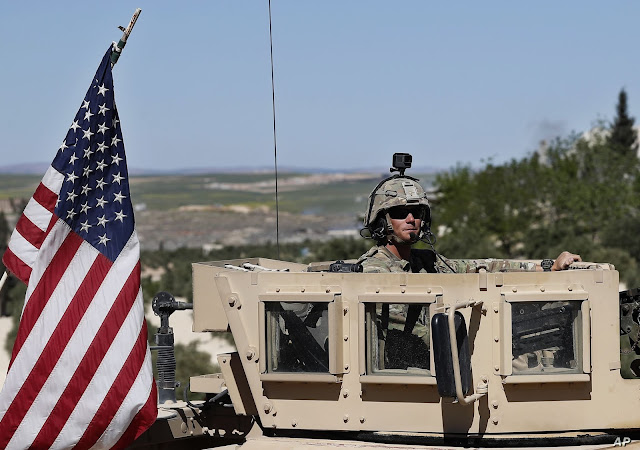 How long is enough?  Do we want American troops to stay indefinitely in Syria?

All that said, the president at least has a cogent position that is consistent with the Constitution and public opinion. He wants U.S. forces out of a conflict in which America’s interests have never been clear, and for which Congress has never approved military intervention. I find that sensible — no surprise, given that I have opposed intervention in Syria from the start (see, e.g., here, here, here, here, here, here, and here). The stridency of the counterarguments is matched only by their selectiveness in reciting relevant facts.

McCarthy is right. This was no surprise. President Trump has been promoting withdraw from Syria for over a year. Troop levels have been going down for months.  But that last line (which I highlighted above) is directed back at National Review and NeverTrumpers.

I do not want to sell out our allies and the Kurds (something the United States is sadly known for). Go back to how the Democrats completely betrayed the South Vietnamese in 1975 and how Obama and the Democrats then did it again in Iraq and helped create the mess in Syria. I do not think what President Trump did was a sell out--it was a tough decision based on paths that were bad either way and the pull out was consistent with policies he ran on. I am for supporting the Kurds. I just am not inclined to do so with U.S. troops embedded with them indefinitely. Update: Flight Er Doc at Instapundit has an interesting comment on the Kurds.

I don't always agree with Andrew McCarthy, but his criticism and analysis of both President Donald Trump and his critics over the Trump Administration has been objective and fair. And that is the key, looking at both sides of the issue at hand.

I cannot say the same for National Reivew (which if Andy McCarthy left would be mostly an empty husk of conservative opinion) and many NeverTrumpers are more hostile to the President than some on the left. NeverTrumpers must know what the Democrats did and are doing, yet they remain completely silent on that, while relentlessly and continually attacking President Trump. Why is that?

Instapundit: Betrayal of the Kurds: A play in 73 acts, Liberal tears for Kurds ring hollow after Vietnam,  and Two takes that differ from conventional wisdom on Syria/Kurds

EBL: Democrats, Spare Me Your Crocodile Tears Over Kurdistan 🐊😭 and Jonah Goldberg, Stephen Hayes, and David French have got a new gig 🛥️🛥️🛥️😬

Last Refuge: Trump is 100% right on withdrawing from Syria: Here's why

American Elephants: Trump did not betray the Kurds

Caroline Glick: Trump did not betray the Kurds

I ❤️Andy McCarthy for his intellectual honesty. Trump makes a tough decision on Syria. But so many of the 'so called' right go 🦇💩 over it. It is far more complicated than David French, Bill Kristol, or Jonah Goldberg would have you belive. @realDonaldTrump https://t.co/BFb5mxmugW
— Evi L. Bloggerlady (@MsEBL) October 10, 2019

Jonah admits he likes some things but Trump has character flaws. 🤷🏻‍♀️ What I hate is how the left and NeverTrumpers work to try to trigger and attack Trump constantly while covering up far greater sins of the left and Democrats.