I am not a fan of Jeffrey Epstein, but I love Peter Mullan's work

There is a certain similarity between the hedonistic forbiden lifestyle (aka "criminal enterprise) of Jeffrey Epstein and the fictional near future world of Westworld and James Delos. There are differences too. 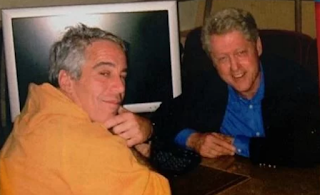 Epstein loved to hang with his pal Bill Clinton

Epstein seems to have been about indulging his own behavior and getting the rich and famous roped into it too (both to curry favor and likely have black mail information on them). That only works so far before you end up being found hung in a jail cell.

Epstein also has a lot of similarities to Ed Harris's "Man In Black" character. Epstein did have a facination with science and research. Epstein's own hubris and sociopathy lead to his downfall.

The fictional Westworld universe has the Delos corporation tracking its guests procivilities and DNA. Probably not for blackmail purposes, but to get behavioral data on predicting future actions and an effort to create downloadable personalities as a form of immortality.

But this is not just a vision of the future, as it is a throw back to the past. Rev. Ralph Smith nails it when he explains what Jeffrey Epstein "got right." That is a very powerful article.

#MeToo rage aside (which is weirdly very anti Christian, yet very tolerant of Islam), a post-Christian world is not necessarily going to be naturally protective of women and children. Can someone ask Kristin Gillibrand what she thinks of her father's involvement with NXIUM?

Theopolis: What Jeffrey Epstein Got Right

The Camp of the Saints: Theraputic Culture and Madness

AoSHQ: Heterosexuality for women is just not working and Morning Report 08.23.19

Instapundit: The NYT agenda driven journalism engaged in some fake news generation of its own, Roman Thing, and Epstein well within historic norms

“ This is the only place in the world, where you get to see people for who they really are and if you don't see the business in that, then your not the businessman that I thought you were. ”