Why do Establishment Republicans let Democrats slander and malign them, then pretend years later they are all good friends? 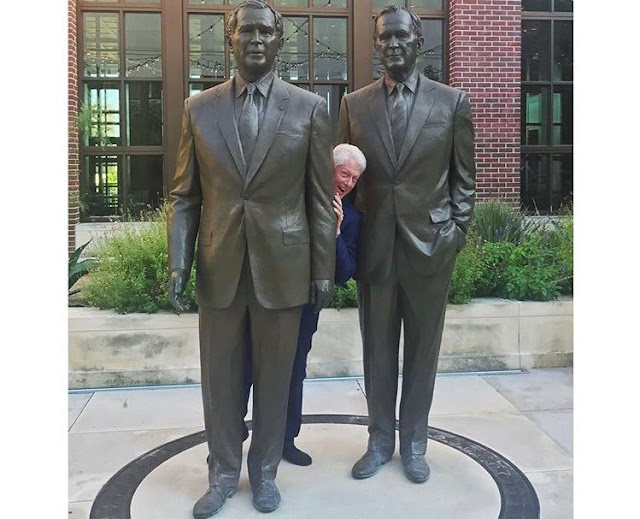 With the passing of George H.W. Bush, a question arises: Democrats malign and slander Republicans while they are running against them, then pretend what good friends they are after elections are over.  And those Establishment Republicans take it. Yet there are those GOPe Republicans who won't forgive Donald Trump for mocking Jeb! during the GOP primaries. Come on, even the Bushes knew Jeb! was low energy.

John McCain was treated as an incompetent fool by the Democrats in the 2000 election.  Yet Democrats were falling over themselves to laud him after he died (especially since he was sticking it to Trump right to the end). Showing again, the only really good Republican to Democrats, is a dead Republican.

When Mitt Romney faced Barack Obama back in 2004, he was constantly slandered by the left. The Democrats savaged poor Mitt (and those of us to tried to help Mitt at the time, wished he would have fought back). He almost did that in that one debate with Obama, then he played it safe (going on to a sad defeat). Yet Mitt is now all ready to roll over for the Democrats now and stick it to Donald Trump every chance he gets.

Instapundit: Joy Behar should try to act with a little more class..., Slate wrote a hit piece on GHWB's service dog?, Donald and Melania Trump salute George H.W. Bush's coffin, The Liberal Media and George H.W. Bush, The Atlantic, Last WASP President?, Bill Clinton revealed a lot of about his character with this, and PJ Media: The only good Republican is a dead one

Former President George Herbert Walker Bush will be universally praised in the wake of his death because it is always the policy of liberals to celebrate the dead Republicans they formerly defamed, as a means to impugn the living Republicans they currently defame. Those of us old enough to remember how liberals hated Bush when he was president (and before that, as vice-president under Ronald Reagan) will not be deceived by their panegyrics to his “civility” and “bipartisanship.”

Rush Limbaugh: My memories of  President GHWB, Joy Behar can dish it out but can't take it, and Fawning coverage of Bush 41 is all about Trump

Babalú Blog: How the AP treated the death of a President vs. a Cuban dictator and President George H.W. Bush Dies

Hot Air: How Bush and Clinton went from political rivals to best friends

NY Post: Democrats really do love Republicans, when they are dead...

You should be fired, @joyvbehar. I dare you to quit.