Is The Weekly Standard Doomed? 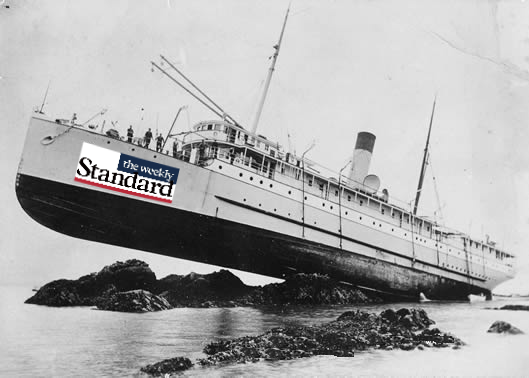 CNN: The Fate of The Weekly Standard Is Uncertain, According to Editor...

TOM: ‘Be Not Conformed to This World’

Whatever happens to Trump, you and the rest of the grifters will never, ever have the respect of anyone again. We conservatives despise you, and the liberals you suck up to hate you even more. No one likes traitors, kid. Ahoy. 🛳🛳🛳🛳 https://t.co/k92EWX1BjK
— Kurt Schlichter (@KurtSchlichter) November 30, 2018

Hot Air: The Weekly Standard may be shutting down

Political Clown Parade: A Wave Hit, And The Bow Came Off

EBL: The Blaze and CRTV joint forces: But where is Cary Katz?

AoSHQ: Slapstick, That Raaaaacist, No One Likes TWS anymore, How long did Hayes have TWS on the market to Lefty Billionaires?, Morning Rant, and Morning Report 12.05.18

TOM: ‘Be Not Conformed to This World’, The Bankruptcy of #NeverTrump, Digital Fire Sale: ‘Get Woke, Go Broke’ Wiping Out SJW Online Media, and Will the NeoLiberals join the NeoConservatives?

The Blaze is a sinking ship. The only way CRTV can save it is to retire Glenn asap.

I won't watch anything associated with Beck. Levin needs to tell Glenn Beck... GET OFF THE NETWORK, YOU BIG DOPE !
— Mitt The Twit (@WimpyRomney) December 3, 2018

Top Headlines (from the AoSHQ side bar):

Of Course: Mona Charen Begging a "Public-Spirited Billionaire" (Like George Soros or Pierre Omidyar, Maybe?) to Save the Weekly Standard
Julie Kelly mentioned Mona Charen being an "adviser" to yet another Pierre Omidyar NeverTrump project. I assume she has his phone number, so I guess she's blegging someone else?
I am also hearing this: Hayes' claim that he called all staffers to tell them this was on the horizon is false. This was a shock to many today, who learned it from Twitter.
It's not official without a Kira Media cartoon
Look at skinny-jean wearing sissy Oliver Darcy having xiself a little snit about having been misinformed about "all" the staff being told. Have a drink, Susan.
Hmmm... A friend points out that last night, leftwingers Jonathan Alter and Ryan Lizza praised the left-leaning Weekly Standard and Steven Hayes particularly. Why? What did they know? Why the pre-eulogy? Why the funeral for the friend, before the body was pronounced dead?
Did Hayes give left-wingers a heads up before his staff, to get out positive press for himself and grease the skids for his dream job at The Atlantic?
Another friend says another leaker at TWS, a lower-level swabbie, leaked the bullshit lie to Brian Stelter that the dirty corporation was cancelling the virtuous Weekly Standard to prioritize the "pro-Trump" Washington Examiner magazine. Um, Seth Mandel is a complete cuck who is right alongside Last and the rest of the wife-sharers in transitioning to left-liberal. It's absurd to claim Mandel is "pro-Trump" or that the already cuckish Washington Examiner will be putting out a "pro-Trump" magazine under the liberal Seth Mandel.
But a third-rate swabbie is lie-leaking to his good friend at CNN to smear the Washington Examiner. I wonder who. And I wonder who'd burn bridges with another media employer like that. Unless he already had a guarantee of work outside of the media. Heck, maybe this person was already receiving money for doing contract political ops on the side, maybe trying to smear conservatives, including people at the Washington Examiner.

BREAKING: Multiple sources tell me that neocon magazine @weeklystandard is expected to close its operations in a few weeks. It had lost many subscribers since the 2016 election as its #NeverTrumper editors @BillKristol @stephenfhayes @SykesCharlie publicly aligned with the Left.
— Emerald Robinson (@EmeraldRobinson) December 4, 2018