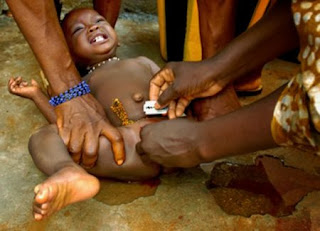 The Right To Choose? Not for you...

A federal district court judge struck down the federal ban on female genital mutilation as unconstitutional. The rational being the federal government cannot impose criminal statutes on the states.

Ok, the image above is how they do it in Nigeria. In the USA it is done in some doctor or nurse practitioner's office (albeit under hopefully more sanitary procedures). But the end result is the same, the clitoris is removed for supposed religious and cultural reasons (and Islam does not mandate FGM,  while widely practiced in some Muslim countries, this particular cultural practice predates Islam).

Jews and Muslims also practice male circumcision. You can debate the pros and cons of such a procedure, but the difference is the male is still sexually functional without a foreskin. A woman when she becomes an adult is going to have a very difficult, if not impossible, time having an orgasm without a clitoris. The underling motivation of doing this has always been about keeping women chaste and under control by removing sexual temptation.

What I can not believe is how the left, such as NPR which hardly holds back its opinions when it is a practice they agree with, seems perfectly ok with this decision. I am a big believer in federalism--and I concur the federal government has gone way to far in many area of states rights, but the suggestionCongress does not have the power to legislate criminal matters is ludicrous (if that is the case why is there such an umbrella of federal criminal statutes out there). While I agree on the danger of expansions of federal power, I am going to disagree with Ilya Somin on this particular case. If this law is struck down by the appeals courts as unconstitutional, however, then how to you square decisions like Roe, Wickard, etc. which trample all over states rights? Regardless on how it ultimately shakes out in the courts, the U.S. Attorney's office absolutely should appeal this.

Even being the federal vs. state law issues, the question arises: why is Michigan allowing this to take place (apparently only 27 states ban it)? And if it is allowed in some states and not others, does anyone seriously doubt it won't implicate interstate commerce when parents seeking it transport their minor daughters to have it done else where.

TOM: Sex: What If We Stopped Pretending We Don’t Know What We Actually Know?


Instapundit: You try to get the courts to recognize enumerated powers, and this is the case they do it on?