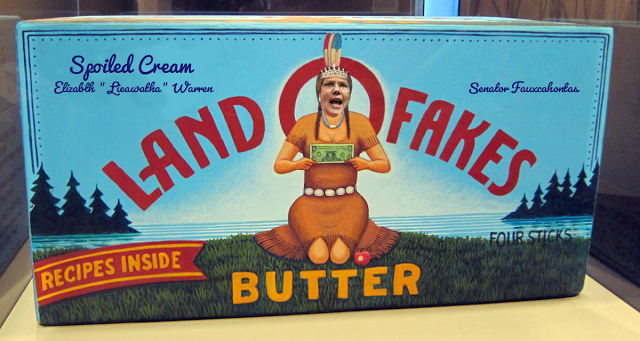 Don Surber: If Liz was smart, she would do it!

While Don Surber is right, I would be surprised if Elizabeth Warren takes the bait. She has the same flaw Hillary had, she is (morally) weak. Because I am sure she long ago did some anonymous testing and probably has no Native American genes. While Liz Warren's family has a connection to the Cherokee people, it is not the type of connection she wants to emphasize.

And so the same institution at which young Barack was "the first African-American president of The Harvard Law Review" notched up another famous first: As The Fordham Law Review reported, "Harvard Law School hired its first woman of color, Elizabeth Warren, in 1995." To the casual observer, Mrs. Warren, now the Democrats' Senate candidate, might seem a 100 percent woman of non-color. She walks like a white, quacks like a white, looks whiter than white. She's the whitest white since Frosty the Snowman fell in a vat of Wite-Out. But she "self-identified" as Cherokee, so that makes her a "woman of color." Why, back in 1984 she submitted some of her favorite dishes to the Pow Wow Chow cookbook, a "compilation of recipes passed down through the Five Tribes families."

Mark Steyn: The Return of Fauxcahontas, Washington's Redskins, and Fauxcahontas and the melting pot

Political Clown Parade: She already knows what the outcome will be...