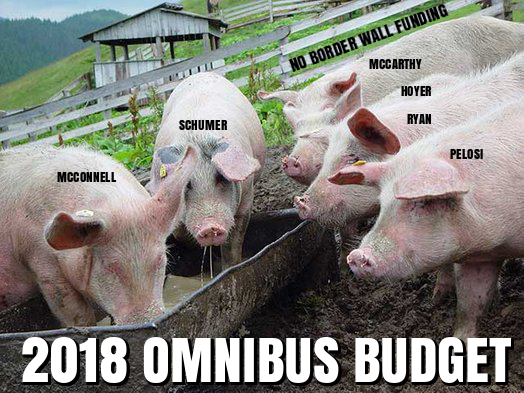 It's really hard to tell them apart...

There is a midterm coming: pigs get fat, but hogs get slaughtered. The GOPe sold you out.

"In a certain sense we were able to accomplish more in the minority than we had the presidency or were even in the majority." Sen. Chuck Schumer (D-NY)

I am considering a VETO of the Omnibus Spending Bill based on the fact that the 800,000 plus DACA recipients have been totally abandoned by the Democrats (not even mentioned in Bill) and the BORDER WALL, which is desperately needed for our National Defense, is not fully funded.

Republicans promised a border wall while Democrats promised DACA, Trump is holding both of them accountable to keep their Promise to the voters! 😎
— Steven Miller (@StephenMilIer) March 23, 2018 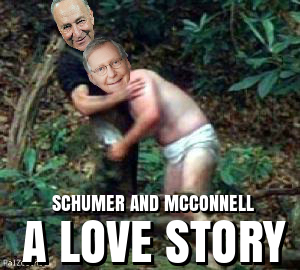 Congress Gives Itself A Bonus!

ALL EYES ON RAND AS SHUTDOWN LOOMS... Sadly, Rand Paul is backing down

BattleSwarm: Ted Cruz On Why He Voted Against The Porky Omnibus Spending Bill


TOM: Will Democrats Self Destruct?  Worse. Omnibus. Ever.  Not if the GOPe beat them

Legal Insurrection: Eeyores and Concern Troll above Omnibus crap sandwich True, but we should complain if we want to!