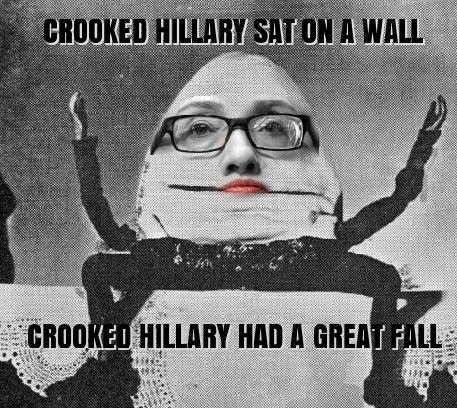 DRUDGE REPORT: Hillary Clinton went with the poor health defense with the FBI, Wiped her Server Clean After NYT Report

There is a reason this was staged for a Friday just before Labor Day Weekend. It is absolutely incredible that a presidential contender is getting away which this nonsense. Hillary Clinton is claiming she does not recall security briefings due to her concussion?

It should have been over for Hillary Clinton with the FBI investigation. Anyone else would have been prosecuted. What is strange is why the Democrats went with Mrs. Clinton, while I understand their reluctance to go all in with Bernie, Joe Biden could have run and would not have any of this baggage to deal with.

Do you think the Clintons have Obama's college applications?  What do they have on Obama?

Doug Ross: The Fix Was In

AoSHQ: Hillary admits she lied, James Comey should be impeached. Ace is 100% correct, Comey is an absolute disgrace and yes this deserves three flaming skulls (cracked like Hillary's).

Hot Air: The Federalist: The Clinton Foundation was designed for two way bribery

Instapundit: Criminal and Clueless, The FBI releases the Hillary Report

EBL: Even the Left Can't Stand Her, This Is CNN, Crooked Hillary and the Clinton Crime Foundation used taxpayer money to pay for that unauthorized server

RedState: Guess what Hillary did to her server when it was revealed?