Ted Cruz: Why Am I Persecuted?

This is a clip from Ted Cruz's performance in a law school production of The Crucible
If you listen to this more than a minute, you will feel like you are persecuted too
Hey, Ted should look on the bright side, it wasn't The Scarlett Letter

Answer:  If you are catching flak, you are over the target...

I am pretty sure this is a parody!

Okay, I am rather skeptical, to the point to believe this I would have to see the high definition verified real sex tape of Ted Cruz engaged in extra marital activities (at which point I would grab a set of knitting needles like Oedipus and...). I can buy Ted Cruz may have LusTed in his heart, but him being a philandering playah with five affairs? I don't think so.

If even remotely true, you don't think Mitch McConnell and Lindsay Graham would have let those dogs of war slip some time ago?  Come on now. 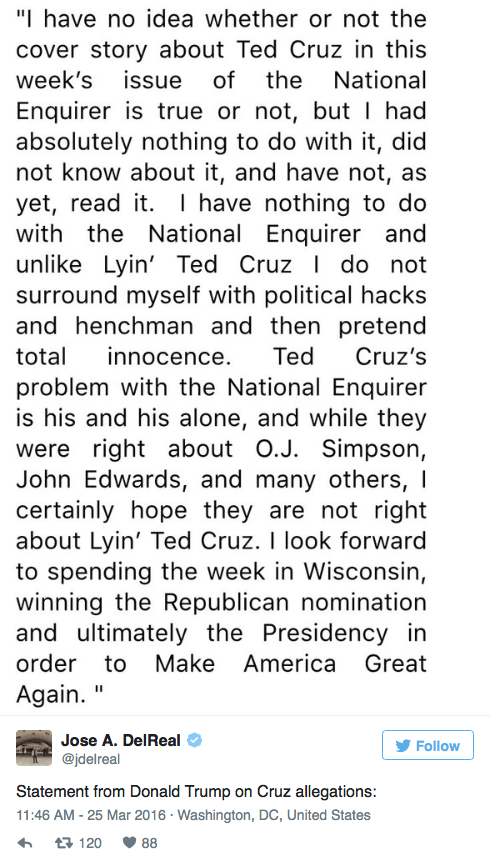 Trump Denies, but you know he is lovin it...

Trump says that the story came from Marco Rubio's camp.  That source story may be partially true (of course National Enquirer who is friendly to Trump would want to give him some cover).  There was a lot of mud slinging at Rubio, including saying he was seen at gay foam parties (the evidence is a tad weak).  I know that Trump supporters have been and are attacking Rubio and Cruz relentlessly with what ever they thought would stick (obviously it is now almost all Cruz since he is still in the race and a threat).  Wisconsin is an important contest and coming up quick.

Instapundit: You don't know Trump as well as you think and five affairs?

Rush Limbaugh: GOPe willing to lose election to save themselves and Wisconsin
Hot Air: Ben Carson helping Trump be "more presidential"? and Ted denies
Am Power Blog: Amanda Carpenter calls it Tabloid Trash
DaTechGuy: What a way to start a Good Friday updated
EBL: Ted Cruz in Wisconsin and Ted has a gift
AoSHQ: #TheThing and Marco supporters
Regular Right Guy: The kiss of death

Wombat: Open up your hate and let it flow into me.

Hot Air: No one close to Cruz believes any of these allegations
Posted by Evi L. Bloggerlady at 9:24 PM