In the wake of the Brussels Terrorist Attacks, Ted Cruz's comments are blowing the minds of Democrats and Media Pundits

Sticks and stones (and especially ISIS nail bombs) will break your bones,
but Ted Cruz's comments will not hurt you...

Rush was all about Ted Cruz today, noting how the Democrats and Media are getting hysterical over the rather mind suggestion that Muslim communities in the United States should be monitored for possible terrorist activity.  Ted Cruz is getting some pushback for what would seem to be a minimum response to a mass act of terrorism in Europe (in an effort to prevent the same thing repeating here).

Nail bombs in Brussels? Nothing like that could ever happen here within the gentle practitioners of the Religion of Peace (or pieces as the case may be). So what if ISIS has 400 fighters terrorists set up for a "wave of bloodshed."  (correction by AoSHQ) Get over your bias and prejudice.

You would think the Muslim community in America would welcome more police and intelligence effort to root out terrorists in their midst and protect their vulnerable youth from being swayed from such toxic influence.  Just like the Mafia in its day was just a small percentage of the Italian community it functioned within, so is radical Islamic jihad.

So why the over reaction by Democrats and the Media? What Ted Cruz suggested was in place both under the Bush and Obama Administrations. We also all know that more Muslims means more terrorism (that is objective fact), so shouldn't there be some effort (obviously while looking out for civil liberties) to mitigate that risk?

Look at what happened in Europe and specifically Brussels yesterday. EU officials and police absolutely knew there was the high likelihood of attacks following the arrest of  Salah Abdeslam. Belgian officials may even have been warned of the actual target. They did not manage to stop the attack.

Does that mean we should round up all Muslims and label them all potential terrorists? No, of course not. Does that mean we should look with extra scrutiny at Muslim communities if we are searching for Muslim terrorists?  Yes. That should be common sense. This is sort of what Google and Facebook does in selling advertising, they look for patterns of behavior. One significant patter for spotting potential Islamic terrorists is they might be Muslim. To pretend that is not the case by our government and EU officials and intelligence services is beyond reckless. This problem is not going away. 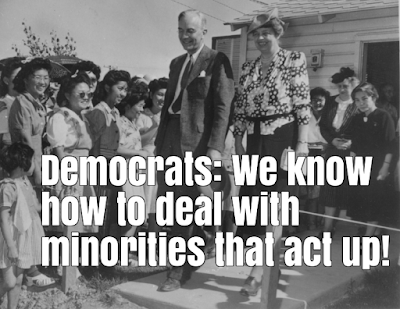 You would think Ted Cruz was like Democrats Franklin Delano Roosevelt or Woodrow Wilson from their  over-reaction!  That is Eleanor Roosevelt above visiting a Japanese American internment camp. 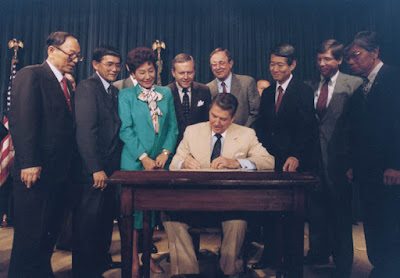 
Instapundit: Obama doubling down on Syrian migrants to USA, Obama Fail, Carbon Hypocrisy, Awful Legacy, Don't know much about history, ISIS controls the media, Last Tango in Argentina, London next, Obama goes after Ted Cruz, The horrible feeling when you realize the entire Western world is run by the mayor from Jaws, Americans have been killed by prisoners released by Barack Obama from Guantanamo (a Willie Horton for our time) and Tom Friedman wonders if Obama knows what he is doing

AoSHQ: Catch and Release Terrorists, Obama Administration admits some of those releases they pushed through may have killed innocent people (oops) and the response to terrorism is a sick joke

American Power Blog: #BrusselsAttacks: Is America Next? and Can Jihad Be Stopped?

Mark Steyn: One Stop Brussels Sentimentalizing and I was only good at enjoying it (demographics are facts and the science is settled)

DaTechGuy: Why I hate them
Posted by Evi L. Bloggerlady at 3:54 PM