Germany and Angela Merkel reap what they sowed...

Even without the specter of Islamic violence or assimilating Middle Eastern and North African men into European society, why would Angela Merkel think inviting more than a million uneducated Syrian refugees into Germany's generous welfare state would be a good idea for Germany's economy?  And the American left is all eager to do the same thing, albeit on a lesser scale.

Mark Steyn: Hold the Mohamed salad,  Here's another sad and disturbing anniversary and no Islam to see here story of the day

His report reads like the protocol of a massacre. "Upon arrival," it begins, "we were informed of the conditions in and around the station by agitated citizens with crying and shocked children." Many "upset passersby" ran to the arriving police to tell them about fights, thefts and sexual attacks against women.
Regarding the situation on the square in front of the train station: "Women, accompanied or not, had to run a literal 'gauntlet' of heavily intoxicated masses of men of a kind that is impossible to describe." There were fears that "the situation we were confronted with (chaos) could have led to serious injuries or even to deaths."
The report mentions deliberate attempts to provoke the police. One example is of someone who "tore up a residency permit with a smile on his face, saying: 'You can't touch me. I'll just go back tomorrow and get a new one.'" Another example mentioned in the report was an unidentified man saying: "I'm a Syrian! You have to treat me kindly! Ms. Merkel invited me." 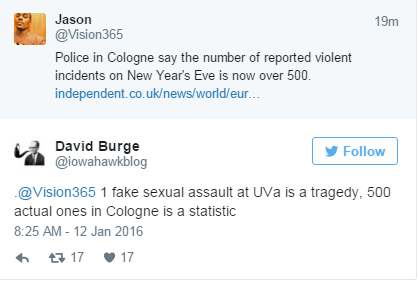 Email ThisBlogThis!Share to TwitterShare to FacebookShare to Pinterest
Labels: Germany, illegal immigration, Islam, Muslims, Syria, the moral decline and collapse of Western Civilization, war on women, Why the European Union is doomed