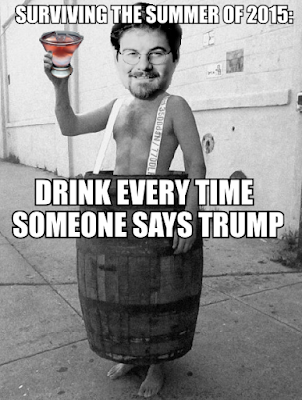 I did advise Jonah Goldberg to drink everytime Trump is mentioned.  I am going with this drink since I like the name (especially with Harper Lee's new novel out and the cocktail also has a dystopian Hunger Games Panem decadence too), I like the ingredients, and I can guarantee this is a tasty summer cocktail that will get the job done during the debate tonight. 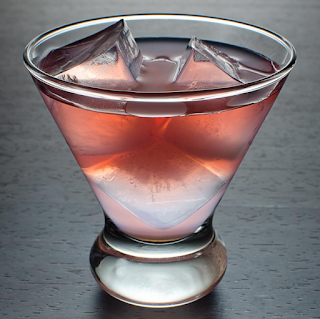 
INGREDIENTS IN THE THE TEQUILA MOCKINGBIRD COCKTAIL
1 Jalapeño pepper slice (update via Instapundit, it's good for you)
2 oz Patrón Silver Tequila  (you can go with Patron if you want to throw money away, otherwise any decent clear agave tequila will work)
1.5 oz Watermelon-Basil Purée
.75 oz Fresh lime juice
.75 oz Agave syrup (one part agave nectar, one part water)

HOW TO MAKE THE TEQUILA MOCKINGBIRD COCKTAIL
In a shaker, muddle the jalapeño slice.
Add the remaining ingredients and fill with ice.
Shake for 10 seconds and double strain into a rocks glass filled with fresh ice.

PREPARATION:
Purée both ingredients in a blender or food processor until smooth. Refrigerate until needed. 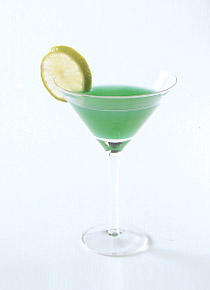 Here is an alternatively minty version of the Tequila Mockingbird which is not as appealing and would almost be guaranteed to give you dry heaves if you drink a shot of it every time Trump is mentioned. Why may yourself ill, go with the watermelon version.

And while we are at it, why not make this a Rule 5 post with this Tipsy Bartender Post doing the Donald Trump Cocktail: 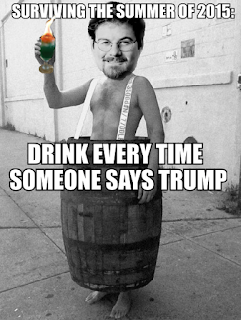 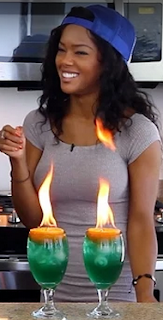 Bonus Funny: Asking if John McCain was in Die Hard

Instapundit: Why Trump Is Resonating (he is a symptom, not the problem), Roger Simon: Passing the Trump Test
Kevin Williamson: Donald Trump and the American Id
Jonah Goldberg: Celebrating Chelsea, Princess Chelsea, Taxpayers shouldn't be forced to subsidize abortion, and for conservatives who want a break from wall to wall Trump coverage (drink)
Power line: Wouldn't it be ironic if Trump manages to derail Hillary?
Mark Steyn: Prince Jeb the unready (the idea of Jeb! winning the nomination makes me want to drink)
AoSHQ: Ace needs a drink, this would be a good one and debate night!
Nate Silver: Trump: Six Stages of Doom
Rush Limbaugh: Psych Ops against Trump and Teachable Moment via Jeb, misjudging Trump, Trumpsters fired up, and no coincidences with the Trump Clinton call
You should not drink on an empty stomach so here are some recipes paired to the various GOP candidates
Lem's Levity: Are they baiting the candidates to go after Trump?

EBL: Have yourself a Hillary Clinton Cocktail 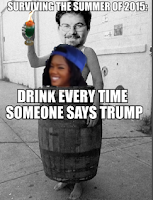