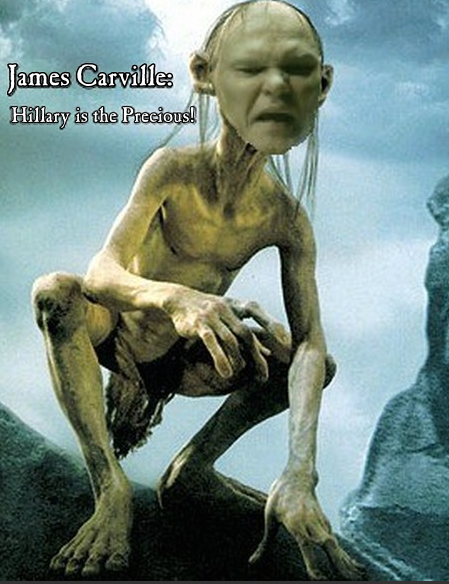 Do you think it is possible that James Carville is less than
objective when it comes to the Clintons?

Instapundit: Hillary has a track record of attacking other women, her lame excuses are catching up with her, not ready for her close up, as Tony Soprano would say, "They are good earners," Maureen Dowd's open letter to Hillary, Hillary vs. Walker, Hillary Crime Section 1001, Hillary is not looking clever, and the Tyrant's Hopelessness


Kevin Williamson: Hillary Clinton: A Monster of Our Own

EBL: Hillary Clinton and the Democrat Ides of March

Jonah beat me to the Gollum imagry! These words do paint a picture don't they:


Flash to a canoe on the banks of the bayou. James Carville has just caught a catfish with his bare hands and proceeds to tear apart the wriggling fish, Gollum-like. He eats the entrails first. Then, suddenly, a flare goes off above the tree line. That’s the signal. He throws the bulk of the carcass into the river, where gators churn the water to grab it now that the apex predator has departed. He makes his way to the shoulder of a dirt road where a limousine is waiting to get him to an MSNBC studio as fast as possible. His suit and tie, neatly pressed, are waiting for him along with as many hot towels as he may need to remove the fish viscera.

Instapundit: 21 Democrats to replace Hillary in 2016 and Why Vox is Down