A metaphor to describe the Gang of Eight and Craprehensive Immigration Reform...

Mickey Kaus sums it up...

We will find out what is in the bill today when they vote on it!

And they are ready to vote on it without actually reading it, what could go wrong?

Wonder why Alaska's senators went for it?  They gave them a special treat just for them... 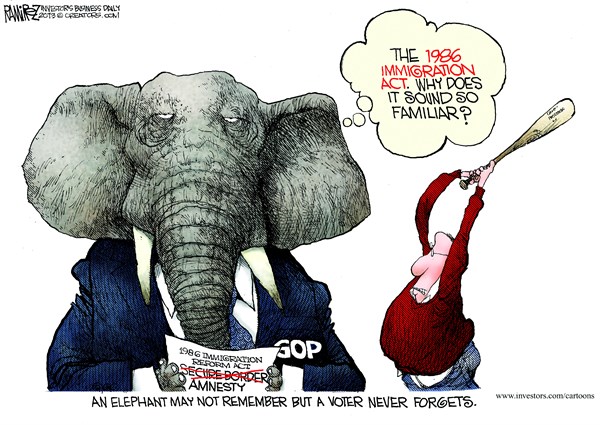 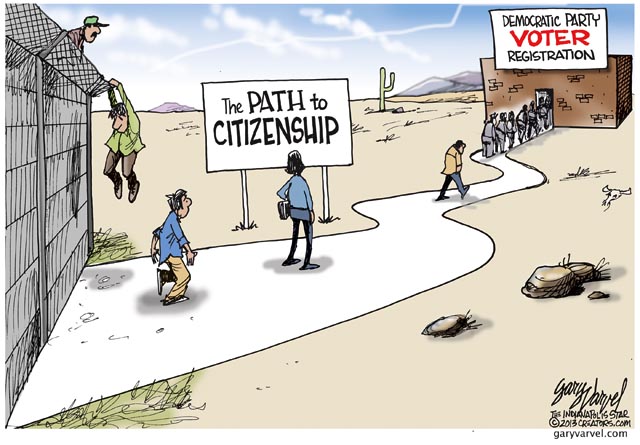 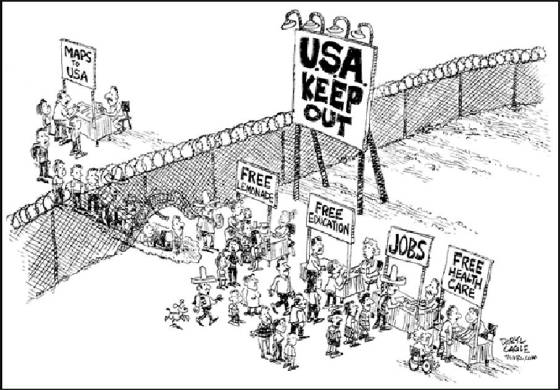 STEVE HAYWARD: Why Immigration Reform Is The Panama Canal Treaty Redux. “It’s true, we have a two-party system in America: The Evil Party, and the Stupid Party. And every once and a while the Evil Party and the Stupid Party get together to pass something really evil and stupid. That’s called ‘bipartisanship.’”
Plus: “I’m actually in favor of some sensible immigration reforms, and believe the GOP could handle this issue in a way that would make liberals howl (start with including some anti-multicultural poison pills in the law, and then debate the matter openly). But increasingly this bill looks to me that it is this decade’s equivalent of the Panama Canal treaty of 1977: if it passes, it is going to end several political careers, starting with Rubio’s. Howard Baker’s Panama Canal treaty vote not only killed his presidential ambitions, but also eliminated him from serious consideration to be Ronald Reagan’s running mate in 1980.”
Posted at 9:40 pm by Glenn Reynolds

Update:
Immigration Bill will devastate Black communities (it is a job killer)
TOM: On Ted Cruz and the Broken Immigration Record
How did they get Bernie Sanders on board?  A nice sweetener for him.
Today Republican Senators vote to implode their own party...
Hey, with all this Snowden stuff, there is even a special visa waiver in the craprehensive immigration bill for Hong Kong!  It has everything!
Obama supporters chant "Yes We Can" as Senate votes on Craprehensive Immigration Bill.

PREDICTS, THREATENS, WHATEVER: The Hill: Schumer predicts mass demonstrations if House blocks path to citizenship.
Actually, that’s no threat. Unruly protests by masses of illegal immigrants waving Mexican flags were one of the things that killed the 2007 amnesty attempt. Marches like that, if repeated, will only help people who vote against this bill.
Related: If “Amnesty” will make the GOP loved by Latinos where are the Latinos holding signs for Gabe Gomez?He’s Latino and pro-Gang of 8, but not getting any love because the Latino vote is owned by the Democrats. So why do the Republicans think they’ll win if they enlarge it?
Posted at 7:17 am by Glenn Reynolds

When Ted Cruz was elected I wrote something like "he'll be what everyone else mistakenly thought Rubio was." Damn perspicacity.
— proteinwisdom (@proteinwisdom) June 24, 2013