Update:  New York Post says Saudi suspect in custody, being treated for injuries related to blast...
(this is a breaking story and facts may be wrong, take these updates with a grain of salt...)
AoSHQ on suspect in custody...
Gateway Pundit:  Police have video of Saudi national leaving bombs in trash cans?  Well that will just ruin Chris Matthew's day if it proves to be true.
Was Saudi National cleared in attack?
Bombing Updates: Police ask for any videos or leads...
Bombs made from presser cookers.
Via Surveillance Video: Is this the suspect?
Update: Breaking:  Suspect arrested!  Found via videos.
Dark Skinned Suspect?  Chris Matthews just lost his tingle. 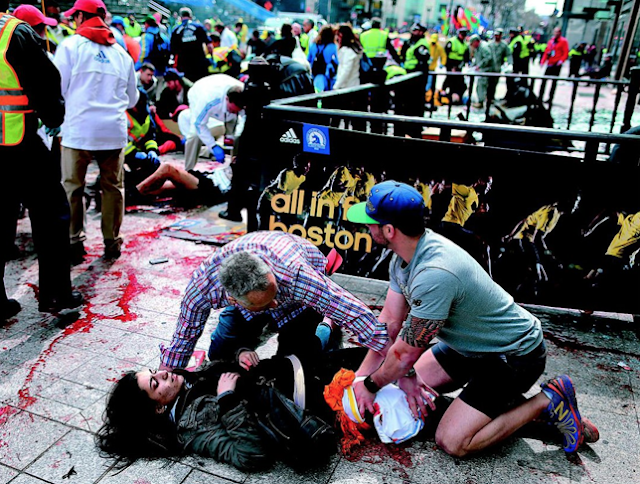 Predictably (and un-helpfully) Nick Kristof blames Republicans (his initial reaction is to make this political)...

Update:  Looks like the NY Post was right (in what it reported) and that TPM was wrong (although technically being "guarded" is not the same as being "arrested").  Whether this Saudi Arabian National is responsible for the bombing is still unknown:


Officials say that Boston PD are "guarding" a wounded man at a Boston hospital as a "possible suspect" - @jimmiklaszewski
— NBC News (@NBCNews) April 15, 2013