Don't believe the negative reviews.  If you liked Les Misérables the play you will almost certainly like the Les Misérables the movie (I liked the novel, play and now the movie).  It sticks very close to the original book (as in the play, not the Victor Hugo novel), but is delivered in a series of close up shots, with the actors singing on the set (rather in a sound studio after the fact).  While some may find this jarring, it does give a perspective to the work that you cannot get in a live performance short of being able to wander around the stage.  Some of the sadder scenes are made all that much more intimate.  The theme of redemption and grace remains.

This only works because the performances and production quality are mostly top notch.  Hugh Jackman and Anne Hathaway give amazing performances.  Samantha Banks is great as Eponine (both singing and in acting).  Even Russell Crowe's Javert is decent (granted he did not have the singing chops, but I had low expectations going in and thought he pulled it off by acting).   Tom Hooper does a great job with the directing, cinematography and in creating 19th century France.  I was only mildly disappointed in Sasha Barron Cohen and Helena Bonham Carter--and they were still okay as the Thénardiers (just not as good as some of the theatrical performances I have seen).

The film is over the top and lavish, but in the end it works.  I am sure it will be a commercial success and will become a classic.

Cameo Note:  Colm Wilkinson, who played Jean Valjean in the original West End and Broadway runs, plays the Bishop of Digne, who inspires Valjean to become a better man.  Some of the critics of this film may be confused by a Catholic priest is a positive roll.  Then again, Les Misérables was panned by the elite critics in 1862 when it was first published.
The historic backstory to the novel, play and film. 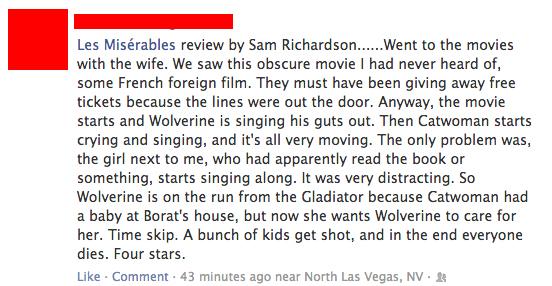 Here is a different perspective:  A review by the Anchoress (actually two other reviews that the Anchoress contrasts).
Here is a slightly more critical review (very funny)

And The Belmont Club notes:  Do you hear the people sing?
Posted by Evi L. Bloggerlady at 8:44 PM