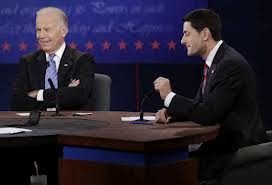 I agreed with Paul Ryan far more, but as debaters they both did well (and there was no surprise there for me)--with the exception of Biden's smirking and interruptions.  I thought that style point actually hurt Biden, rather than helped.  That is especially true if you watched on split screen (CNN uses split screen, Fox does not).
Overall, I do not see this debate changing anyone who was committed already to the candidates or shifting any undecided voters.  The dynamics of the race stay essentially the same as they were immediately before the debate.

I watched the CNN feed and it had the reaction from its uncommitted panel voters during the debate, take this with a grain of salt but Ryan did very well with the women.  He did okay with the men (so did Biden) but overall Ryan did better with the ladies.

Ryan, in #VPdebate closing statement: "This is not what a real recovery looks like. You deserve better."
— USA TODAY (@USATODAY) October 12, 2012

The dynamic remains the same.  Romney and Ryan are still winning.

Chickenlittle nailed Biden on this a while back...
Posted by Evi L. Bloggerlady at 10:28 PM