What will Israel do in response to Iran's nuclear weapon ambitions?

If Iran gets nuclear weapons, will it use them?  "Benjamin Netanyahu told NBC’s Meet the Press that Iran is guided by fanaticism with no rationality, and that those who believe Iranian nuclear weapons could lead to regional stability are stupid."  Netanyahu is making clear signals that Israel is not going to allow Iran to obtain these weapons without a military response.  Iran also knows that Europe and Russia are not going to put any significant pressure on Iran to back off.  Netanyahu has been trying to get President Obama to recognize the danger, but American and Israeli officals are at loggerheads over how to deal with Iran.  Obama does not see the profound risk that Netanyahu does, which is why he publicly shunned Netanyahu--he does not want to be connected with the action Israel is about to undertake:


The severity and the urgency a nuclear-armed Iran represents to the world and to Israel do not register with Obama. Rather than take the bull by the horns, admit that sanctions and negotiations have failed, and bite the bullet for a massive U.S. military strike against Iran, Obama characteristically is taking the path of least resistance and just going with the counter-productive flow.

Nevertheless, the Iranians have said they will attack American bases in the middle east and will block oil out of the Persian Gulf.  British and American ships are preparing for that very event.

Israel does not want to look like it is interfering in American politics.  But Israel may act anyway.  The implication of such an attack are huge since oil prices will undoubtably skyrocket in response (at least in the short term) and the economic impacts could be enormous.

This is what is driving Netanyahu:  What if the unthinkable happens and Iran gets nuclear weapons and actually uses them?  That is not a risk Israel can face.

The challenges of such an attack are enormous: 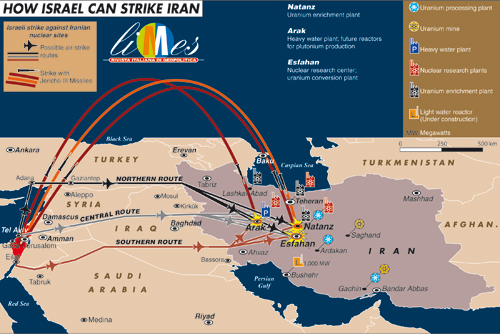 Beyond being difficult, such an attack will not be final:


There is nothing new about the fact that even the most optimistic planners and commanders in the IDF do not believe that Israel can completely wipe out Iran's nuclear capabilities. Senior air-force officers have long been saying that "we will have to go back to Iran a second time, we have no illusion that we can delay their plans by more than two or three years."

Yesterday was the Jewish New Year.  This may turn out to be an interesting year.
Posted by Evi L. Bloggerlady at 12:57 AM