Obama Framing Fail: Attacking Ann Romney is not working for them... 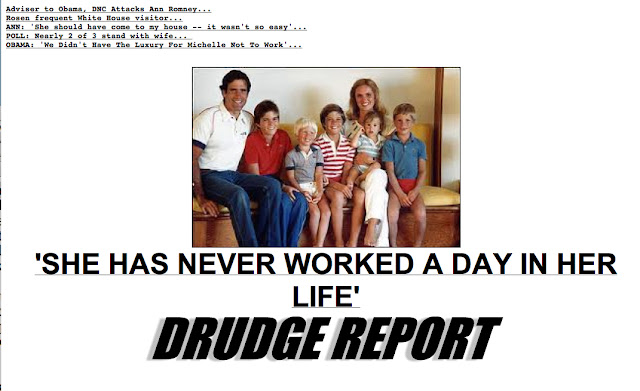 Here is the Drudge Page link.

Ann Althouse does a very good job explaining how this has backfired on the Obama White House.
Talking about hypocrisy:  Obama's White House pays women less than men?
Democrats create firestorm over claiming stay at home moms not working...
The Anchoress (via Instapundit):


“There is irony in Rosen sneering that Ann Romney knows nothing about working women, while she, Rosen, supports an administration that pays its female employees less than men. But I digress. Rosen seems to truly not get why people, especially women (both working and at-home) took offense at this. . . . Because — unlike Rosen, or her favored women – I’ve actually lived the life of both struggling at-home mother and struggling working mom, I am inclined to take offense at the notion that a woman who finds her first vocation in child-rearing has surrendered her intellect, and therefore has nothing to say to the room. And make no mistake, that is precisely the sentiment that rests at the heart of Rosen’s remarks — an ugly disdain wholly at odds with the standard feminist rhetoric about the dignity of women and their choices.”

Prior EBL Post:
The Democrats and their media allies make up lies about Ann Romney

Update:
No surprise here:  Debbie Wasserman Schultz is involved...
White House is saying Hillary Rosen is not connected to them (under the bus with her!).  Sorry, that is not going to fly.  Hillary Rosen has multiple meetings with President Obama and most of his senior staff.  She is definitely tied in.
The Blogmocracy on the topic.

Unbelievable:  Democrat and Obama ally Hillary Rosen doubles down and defends what she said about Ann Romney!
Obviously Alexrod must have sent her a message:  Now Hillary Rosen is apologizing.
Legal Insurrection notes something not surprising:  Hillary Rosen is a hypocite and partisan hack
Red State:  Hillary Rosen and the war on (conservative and stay at home) women...
The Anchoress:  "Hilary Rosen may not formally work for the Obama campaign, but last night she was shilling for it."
Tweet of the day: The woman who “never worked a day in her life” just won a media war with a career political communication “expert.”
Professor Jacobson has some more excellent tweets (just not as good as the one above).
Protein Wisdom:  Ann Romney inauthentic woman?  White House makes Rosen take one for the team...
The Other McCain:  Feminism, Careerism, Lesbianism
Weasel Zippers:  Biden drives bush over Rosen!
Twitter Firestorm over this story...
Posted by Evi L. Bloggerlady at 11:56 AM