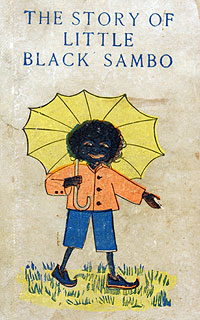 The Story of Little Black Sambo was first published in 1899 and was written by Helen Bannerman.

Sambo, a boy from South India, has fine new clothes and an umbrella.  On his way home Sambo is accosted by four tigers.  To avoid getting eaten he gives the tigers his clothes and umbrella and climbs a tree to safety.  The tigers, ever so vain, get in an argument on who looks best in Sambo's new clothes and manage to drive themselves into such a frenzy that they churn themselves into butter.  Sambo climbs down, collects his clothes and the butter and goes home.  His mother uses the butter to make pancakes.  The end.

Is this story racist?  Some people from South India can be very dark skinned.  The title is dated by today's standards, but the story itself is not racist at all (although maybe some of us are color blind to all the racism in the world).  It is not one of my favorite children's books (I looooove The Story of Ferdinand myself) but it is better than a lot of the dreck out there.  However, the story was copywrite infringed over the years and and there were versions made with illustrations that in some cases were derogatory to African Americans.  And the name Sambo was used in a derogatory manner in the past.  Hence the bad reputation of the name "Sambo."

There was a play and movie done on the topic of politically correct obsession with racism called Spinning into Butter, in a reference to The Story of Little Black Sambo.  I saw the play and liked it a lot (I missed the movie when it came out).

So why bring it up?  Well we have Charles Johnson in his insane Javert-like pursuit of anything sounding to him of racism.  Charles Johnson is so committed to uprooting racism that his followers will go plant racist posts on conservative leaning blogs so has to allow Charles the opportunity to decry that racism.  It is not even real.   Democrat Charles Johnson does this in shameless self promotion, just like Democrat Fred Phelps does in bashing homosexuals and dead soldiers.

Of course, the proper term is raaaaacism, which is not real racism, but the feigned outrage of racism.  When Blacks and Jews are conservative, however, well then all pretense of political correctness is gone.   We have the European Union coming close to banning Tin Tin.  The Belgians may be evil, but Tin Tin is not.  Yes the depictions of black Africans in Tin Tin look like racial stereotypes, yet Tin Tin in the Congo was one of the most popular of the series with black Africans (just like Speedy Gonzales remains generally popular in Latin America).  We have CPAC participants being accused of racism for using the world "knickers."  And of course, The Adventures of Huckleberry Finn, probably Mark Twain's greatest work is the fourth most common banned book in the United States.

Samuel L Jackson said he voted for Barack Obama because he is black.  Big deal.  Like people who celebrate St. Patrick's Day didn't vote for John F. Kennedy because he was Irish Catholic.  I am not saying that is right, but it is human nature.  I like Samuel L. Jackson because I think he is an entertaining and talented actor.  Is anyone moving to ban Pulp Fiction for its language? While I assume they do not show it in high schools (at least not yet), I would bet a lot more high school kids have seen Pulp Fiction than read Huck Finn now a days.  I like the movie, but it is not a good alternative to Huck Finn.

And someone needs to tell Charles Johnson to chill out.

Update:
Lefty racism at OWS?  Not much lefty outrage over that...  Charles Johnson is not going to bring that up since it reminds him of his split with his long term partner Kilgore Trout.
7 year boy branded as a racist for asking another boy if he is brown because he is from Africa...
Posted by Evi L. Bloggerlady at 12:05 AM