Nelson Riddle and Frank Sinatra: You Make Me Feel So Young, I've Got You Under My Skin, and Only The Lonely

June 1 is Nelson Riddle's birthday (so I am setting up a novena). You can't properly do the 100th year Sinatra Celebration without remembering what a critical role Nelson Riddle played in Sinatra's career:


NELSON RIDDLE was one of the greatest arrangers in the history of American popular music. He worked with many of the major pop vocalists of his day, but it was his immortal work with Frank Sinatra, particularly on the singer’s justly revered Capitol concept albums, that cemented Dad’s enduring legacy. He was a master of mood and subtlety, and an expert at drawing out a song’s emotional subtext. He was highly versatile in terms of style, mood and tempo, and packed his charts full of rhythmic and melodic variations and rich tonal colors that blended seamlessly behind the lead vocal line. He often wrote specifically for individual vocalists, keeping their strengths and limitations in mind and pushing them to deliver emotionally resonant performances. This is evidenced certainly in his work with Sinatra in the following quote from Charles Granata’s book “Sessions with Sinatra,”: “It quickly became apparent that Riddle, of all the arrangers the singer had worked with, complemented Sinatra’s talents better than anyone else.”

It all came together starting in recording sessions in 1955…


Fifty years ago this evening Frank Sinatra entered Capitol’s KHJ Studios on Vine St. and from 8 to 11:30 proceeded to record 4 songs. Three of the tunes were done for “Songs for Swingin’ Lovers” and one, “Flowers Mean Forgiveness,” was laid down for a single release. The session was arranged and conducted by Nelson Riddle. A thirty-four piece orchestra and a chorus of four male singers had been contracted for the evening……During the afternoon rehearsal the musicians gave Riddle a standing ovation after running down the “Skin” chart.
Even today it is difficult to fully comprehend the importance of that moment so long ago now. Sinatra and Riddle created a sound that evening destined to be imitated by scores of singers. The urban ethos “Skin” would personify became the single most identifiable Sinatra sound.

Riddle's favorite album with Sinatra was Only The Lonely:


Bob has Call Me. I love Paris, and You're Nobody Till Somebody Loves You
Pundette has Sinatra and Riddle and that Voodoo that you do so well and That Old Devil Moon
Mark has I'll Be Around and The Nearness of You 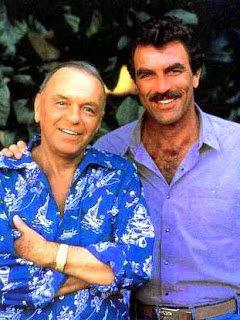 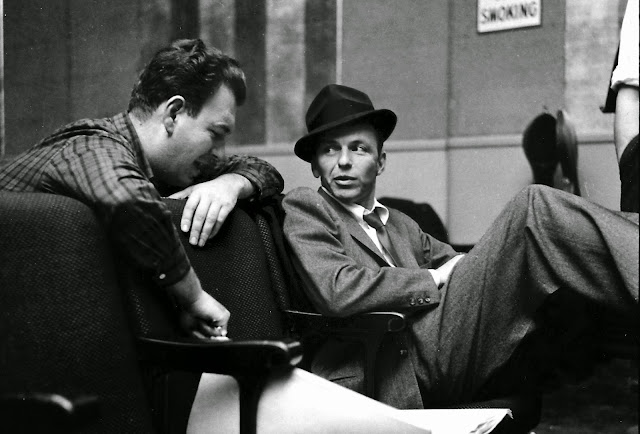 Update: Sinatra singing Witchcraft to the Nelson Riddle Orchestra
Posted by Evi L. Bloggerlady at 12:00 AM