Separated at Birth: Ann Althouse and ...?

This is a bit of insider blogosphere baseball, so if you aren't into it, that is perfectly okay.  But to my friends over at Trooper York's place this one is for you.

There is a bit of a shake up going on at Althouse right now. Ann had a small dust up with Dr. Helen and Glenn Reynolds (who of course has been one of Ann's biggest supporters over the years).  Glenn's response seemed pretty mild and courteous: Ann is a thoughtful and open-minded and smart woman, but at some level I feel like she doesn’t really get it.  Actually that is very generous by Glenn Reynolds.  When some of her commentators pointed this out, however, panic set in over at Meadhouse. In a Charles Johnson like move, Ann and Meade have shut down comments completely (at least temporarily) and are banning many of their long term commentators.

Now I occasionally comment here about an Ann Althouse post, but I rarely comment on the posts directly.  I also rarely read the comments there so I do not know what is going on (nor do I care for the most part).

But then I got recently tipped off that Meade was accusing an old Althouse commentator Fred4Pres of being some troll commentator "President MomJeans."  I have no idea who Mom Jeans is (and I have been told that commentator also posts as some offensive troll "Whore of the Internet")[I have been told that is incorrect], but I know neither are Fred4Pres. So what prompted Meade's accusation?  Damn if I know. Fred4Pres has not commented over at Althouse for almost two years.

But given Meade's July 5, 2013 post, Fred4Pres returned and commented over there in response.  Before Meade goes and purges them all here are some screen captures: 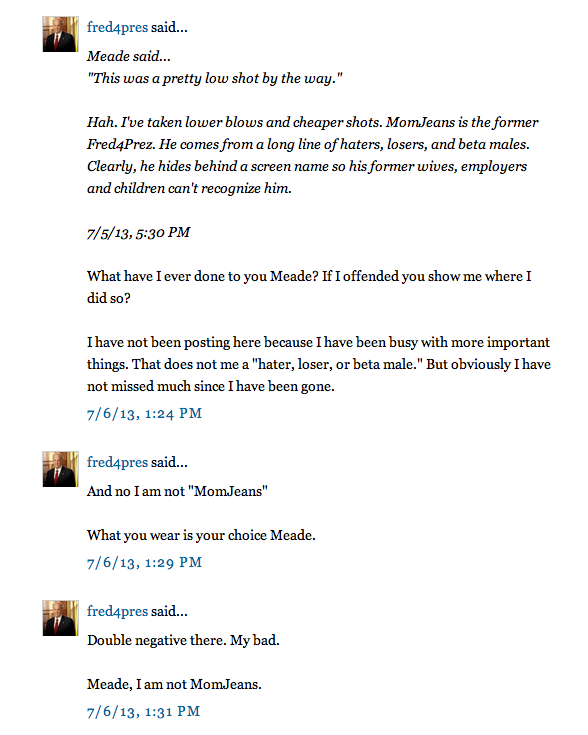 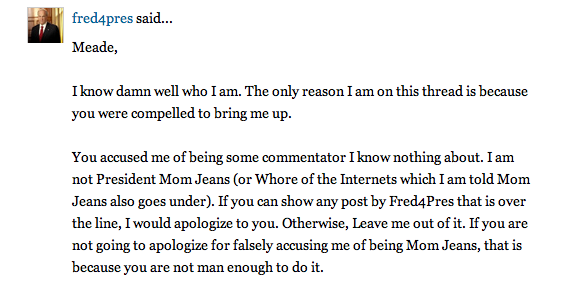 [EBL had a post too, but Meade deleted it]

No apology was forthcoming to Fred4Pres from Meade.  And I know there is no evidence to support any of Meade's accusations about Fred4Pres being MomJeans (it must have been some speculation on his part, which he was wrong about).  But that is how Meade operates, rather than just apologize for a mistake he escalates things and make them far worse.

EBL has nothing to do with MomJeans or any other sock puppet trolls on Althouse.  If I am going to criticize Ann and Meade, I can do it right here.  And I admit, I have teased her in the past:

For the life of me, I do not understand the over reaction over there, but she and Meade should seriously leave me out of it.  And leave Fred4Pres out of it too.

Some Macho Response/Crack Emcee posts:
Let's all thank Ann Althouse
Instapundit stands up to Althouse...
Ann Althouse is a bitch (and everyone should know it)
Fumbling around the the dark (as seen in the light of day)
Ann Althouse's Blog is now coming apart at the seams...

Ann and Meade are open for limited business for comments:

Meanwhile Ann suggest this story is a metaphor.  She is right, Ann and Meade are the tigers (well more neutered Wisconsin house cats than tigers), spinning around the tree until they turn into butter.  As for the valuable heartwood, that is what the commentators used to create.  Until she drove them away.

Had to shut off access to comments on the blog today, because some commenters stank up the joint http://t.co/1iBIrtne9s
— Ann Althouse (@annalthouse) July 7, 2013


Hey Meade just posted here!
Althouse Unfiltered (not affiliated with the Althouse blog, just about it).
The Macho Response: Althouse: Grovel or I will never call you names again...
Lem's Learning Levity:  Why Blog Crashes Have Become More Mundane...nice one!
Lem is on a roll:  Althouse Street and the corner of the Arab Spring...
Crack is on a roll too...and Ann... 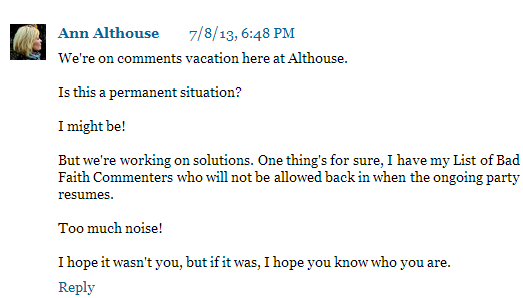 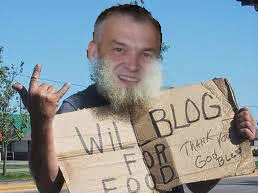