Court documents say Omar Abdelbadie, who is on the  University's dean's list, saw the girl walking on "The Ave" Sunday and talked to her because she was dressed provocatively.According to CBS affiliate KIRO-TV, the victim told investigators that she disclosed her age to Abdelbadie.They allegedly smoked marijuana and had sex at his apartment.The station reports that according to Washington State law, sexual intercourse between a 22-year-old and a 12-year-old is considered second-degree child rape.The girl was a runaway who had been reported missing by her guardian. Someone who saw them together called police Monday, and Abdelbadie was arrested.

He can't use the Lesbian in love defense...  But maybe he can justify this under Sharia law.  CAIR can give us all a lecture on how it is our fault.  He is on the Dean's List.

Hey, although he is (presumably) not here illegally, maybe we can give him amnesty permanent residency and citizenship too!  He is a foreign student from Egypt:


According to the University of Washington's website, Abdelbadie was born in Egypt, has been living in Bellevue, Wash. for the last 8 years, and is majoring in neurobiology and minoring in Japanese.

But as a mitigating factor, Omar Abdelbadie was active with the University of Washington's Interfaith Council: 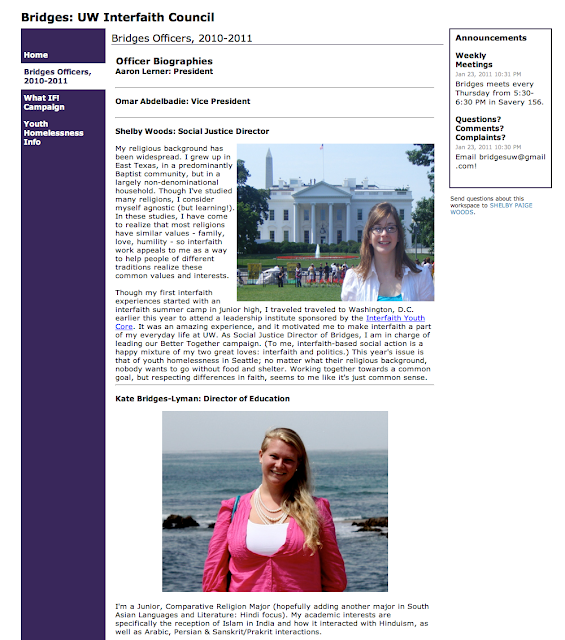 Update:
More from Atlas Shrugged
Isn't giving marijuana to a minor a crime, even in Washington State?
Kudos to his friend for turning him in to police:


According to the girl’s account, Abdelbadie approached and struck up a conversation with her, and then asked her to smoke marijuana with him. The girl said she told him her age several times before he brought her back to his apartment, where he had sex with her after claiming she had “seduced” him.
The girl left Abdelbadie’s home the following day. Abdelbadie and a friend are alleged to have walked her home, and watched hiding behind a fence as she walked up to the house.
Abdelbadie’s friend – who met Abdelbadie when signing him up for a children’s charity -- then called 911 after arguing with Abdelbadie about his conduct with a young girl. Officers responded to the area and arrested Abdelbadie.

Separated at Birth: Omar Abelbadie and...?


The case has gotten national attention because of reports that Abdelbadie, an immigrant from Egypt, was a member of a controversial organization, the Council on American Islamic Relations (CAIR). A web site for the group’s Washington State affiliate listed Abdelbadie among its “core volunteers,” and Abdelbadie was also listed as former vice-president of the University of Washington’s Interfaith Council. Critics say CAIR has connections to radical Muslims, including the Hamas terrorist group.

McCain goes not to note:


Pamela Geller, the New York-based author of Stop the Islamization of America, said the accusations against Abdelbadie show “the same modus operandi behind the scores of Muslim child sex trafficking gangs in Europe.” Reports of sexual exploitation of young girls by Muslim men have made sensational headlines in England. In one notorious case, Abid ­Saddique and Mohammed Liaqat led a gang of men in Derbyshire who exploited 27 girls, some as young as 12. A report by a youth agency about that case concluded: “Issues of culture, ethnicity and identity were a feature both in relation to the victims and the alleged perpetrators.”

More Kudos to the person who turned Omar in.
TOM: The problem with neurobiology majors
TOM: The eliminationist rhetoric of @QueerSpring2013...