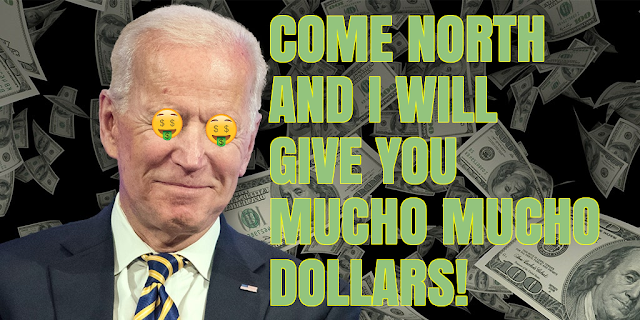 Instapundit: Biden Back To Buying Off Illegals 🤑💸🤑
EBL: BIDEN WANTS TO PAY ILLEGAL ALIENS $500,000 😱🤯🤑
After Joe Biden saying this is untrue, the Biden's Administration admits they are going to pay illegal alien families who were separated at the boarder under the Trump Administration (standard operating procedure during Bush and Obama Administrations) lots and lots of money. Even those Americans hate it, it is still going to happen. Why?  Because Biden cronies want it to happen and so they will reward them (and it also encourages more illegal immigration, which Democrats want). Biden was against it before he was instructed by his staff that he supported it.
It could stop if Mitch McConnell and Kevin McCarthy wanted it to stop. They could make it so difficult on the Democrats that they would have to back down. That is too much work so the GOPe will not fight too hard.
AoSHQ: Morning Report 11.08.21 and Polling Toxic on Payouts (yet Biden is still doing it)
Powerline: It's Gonna Happen


Watch: Fox’s Peter Doocy Responds to White House pushback on immigrant payments in exchange with Joe Biden: “If That’s What the President Meant, He Could Have Just Said That” pic.twitter.com/EcikMy1npo

President Joe Biden will give illegal immigrant families one Hunter Biden painting to compensate them for their separation! Win Win! 🎨🧑🏻‍🎨🤦🏻‍♀️https://t.co/4Ooi4sIOrG pic.twitter.com/UybvqjCi5i