How Depraved Is Hollywood? 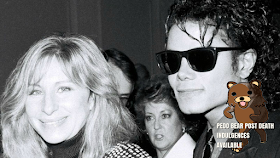 Barbara Streisand says Michael Jackson did not kill anyone, those kids weren't harmed too badly.

Babs says the parents, not Jackson are to blame...Jackson had his needs.

There are elements of truth in what Barbara Streisand says. Jackson's victims were thrilled to be there. Their parents are certainly to blame for what I would say was criminal neglect and sacrificing their children on the alter of celebrity.

Streisand also makes another good point: Women are not being hired for certain jobs because men in power do not want the risk of being accused. Ok, I believe that.

There is also a degree of truth that people need to get over things. Not be victims perpetually but deal with the past and move on (how ever bad that past is). Being molested as a child is horrible, but there are worse things (the few Holocaust survivors left were children when those things happened to them--go ask them what they endured).

The #MeToo movement has gone too far and you are seeing a lot of Hollywood Celebrities realizing they could be next for things they may or may not have done decades ago. The Salem Witch Trials lasted about a year until they decided to accuse the Massachusetts Colony's Governor's wife at the time. Such nonsense was fine at the periphery, but when it challenged those in real power it was then shut down. Many on the left were fine watching institutions like the Boy Scouts and Catholic Church be destroyed by such accusations, but Hollywood studio executives and big name talent?  That is going to far!

But the big reveal for Babs is when she says Jackson is just a victim or there was something in his DNA. So Barbara Streisand think it is ok for adult men to sexually abuse prepubescent kids (provided they don't kill them) and they have talent like Michael Jackson. There is an indulgence for that.