Actually Barack Obama thinks dogs are a bit tough...
Who let the dogs out?  Axelrod did!
“Say what you want about Romney, but at least he only put a dog on the roof of his car, not the roof of his mouth.”

Update:  It is going to be a long dry summer and the Dems and their allies will be starting these spot fires all over the place.  The conservative blogosphere will be like smoke jumpers, either putting them out or creating fire breaks with facts such as these.  Because the main stream "drive by" media is in the bag for Obama.


Update:
The Other McCain:  What do Bernard Archer and Barack Obama have in common?
Legal Insurrection has more...
For Young Obama:  Dogs, it's what's for dinner!
Althouse on the escalating and silly "war on dogs."  Of course it is silly, but the sad part is Alexrod must have profiled grouped this and figured he could hurt Romney with it.  Unfortunately, he forgot about that book written by Bill Ayers Barack Obama.

How about some tweets?

John Hayward@Doc_0
So, to sum up today's canine news: Romney rides with a dog on the roof of his car, Ted Nugent hunts with one, Obama eats them.

Kathleen McKinley@KatMcKinley
THis is why I love the New Media. Finding a quote that Obama ate a dog is something the MSM wld never bother with. Just the Mitt/dog story. 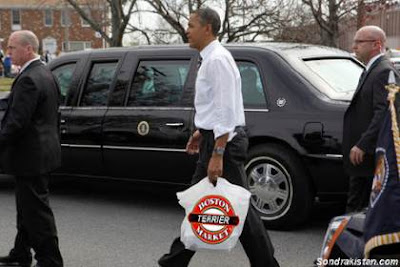 Is there nothing Obama can't chew?
Instapundit reports:  THE REAL MEANING OF DOG-GATE: “It’s amazing how the aptly named ‘Army of Davids’ is able to use the Internet and social media to run with a theme and dominate the popular imagination. We may be seeing the end of an era dominated by ability of Leftist comedians like Jon Stewart, Bill Maher or the cast of SNL to create a false image of a political figure. Perhaps the trashing of Sarah Palin was the high point of their power, just as Watergate was for the MSM. Ridicule is the most potent political weapon. Obama is rapidly looking less and less like a President and more and more like an inept pol who’s also something of a doofus.”

streiff RS@streiffredstate
RT @jtLOL: Q: How did @BarackObama get his dog to roll over? A: Um, it's called a rotisserie.#ObamaEatsDogs
Posted by Evi L. Bloggerlady at 12:54 AM

Email ThisBlogThis!Share to TwitterShare to FacebookShare to Pinterest
Labels: Barack Obama, Election 2012, hypocrisy of Obama vs. the GOP